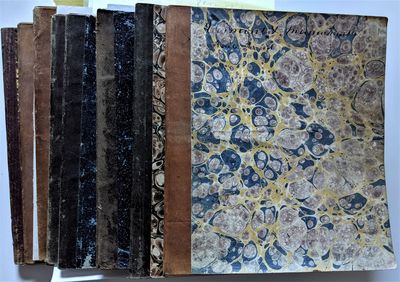 by Worcester County, MA. Crawford, William
(Worcester, MA.), 1855. Eleven (11) manuscript notebooks.  200 x 180 mm., [8 x 7 inches].  Together about  925 pp., including some loose notes laid in.   Bound in marbleized paper covers, one lacking a cover. Covers showing some wear, browning to some of the paper, and some upper right corners folded.  Manuscript in pencil & ink; mostly legible. Series of eleven annual notebooks containing detailed surveyor's information about the laying out of roads in Worcester county during the mid-nineteenth century. General William Crawford, (1783-1864), whose books these were, served as Chairman of the Worcester, Massachusetts, County Commissioners, between about 1830 to 1850.  Born in Oakham, Worcester County, he was son of William, Sr.  who was a clockmaker and captain in the Revolutionary War. William Crawford was a graduate of Dartmouth College in 1807 and served in the War of 1812.  He was later Brigadier General of the Massachusetts Militia, and was a member of the state legislature. The notebooks include in part road surveys and hand written descriptions in the following cities and towns in Worcester County:  1):  Shrewsbury, on petition of Henry Snow and others (2): Charlton, on petition of Roswell Warner; Ashburton, on petition of Elijah Gross; Mower (or Mouin ?) in the city of Worcester, on petition of the Mayor. 3):  North Brookfield, on petition of Nathan Pine; Rutland, on petition of Daniel Darling; 4): Millbury, a road through land of Eli Golding, Douglas. 5): Uxbridge, Sutton and Northbridge on petition of Warren Hunt. 6): Harwich on petition of Sylvester Bowen. There are a few references to railroad companies and references to their tracks, bed, and routes, including the Fitchburg and Worcester Lines, the Vermont & Massachusetts Lines, and the Cheshire Railroad Company through Winchendon. Notes include road boundaries, described both in penciled notes and mathematical calculation. One of the loose scraps is a one-page letter signed by Horace Leland (Sutton, January 22, 1852) concerning the death of Sylvester Morse. Leland was a selectman in Sutton. Some commissioner's notes from as late as 1855 are included in a different hand, so it is possible the notebooks continued with later commissioners. "The business of the (Worcester) county commissioners, though limited in scope, compared with the old Court of Sessions, (and) has risen in importance and responsibility with the rapid increase of the county in numbers and wealth. The commissioners are charged with the duty of laying out county roads and have certain duties in connection with the location and crossings of railroads. All  court-houses, jails, and houses of correction are built by them, and kept in order for the holding of courts, and the detention and discipline of prisoners. These and cognate duties require them to be in frequent session, and to visit, in succession, all parts of the county. . .  Col. Lincoln was succeeded as chairman of the board in 1842 by Gen. Crawford." William Crawford, General.  The Crawford Family of Oakham, Massachusetts, Oakham Historical Society, 1912. pp. 12.  D. Hamilton Hurd (editor). History of Worcester County, Massachusetts, Philadelphia, 1879. (Inventory #: 770)
$750.38 add to cart Available from
De Simone Company
Share this item
De Simone Company, Booksellers
Offered by