TRUSTEE OF THE NATION: THE BIOGRAPHY OF FIDEL V. RAMOS 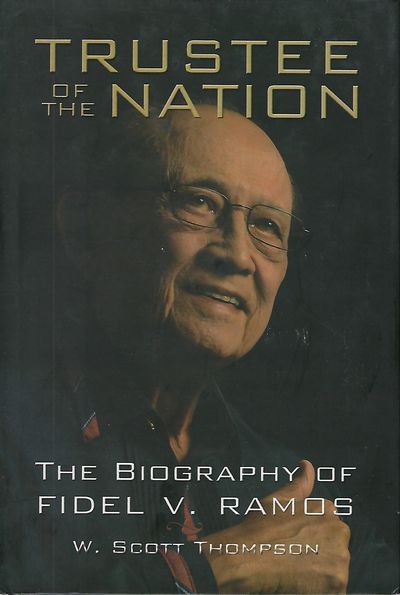 by THOMPSON, W. Scott
Manila: Anvil Publishing Inc., 2011. First Edition. Signed inscription from Ramos on the title page: "Mabuhay! best wishes!!! Fidel Ramos." Also inscribed by Thompson on the same page: "With respect, Scott Thompson." Fidel Valdez Ramos [born1928] is a retired Filipino general and politician who served as the 12th president of the Philippines from 1992 to 1998. He is the only career military officer who reached the rank of five-star general/admiral de jure, who rose from second lieutenant up to commander-in-chief of the armed forces. During his six years in office, Ramos was widely credited and admired by many for revitalizing and renewing international confidence in the Philippine economy. During the 1986 EDSA People Power Revolution, Ramos was hailed as a hero by many Filipinos for his decision to break away from the administration of President Marcos and pledge allegiance and loyalty to the newly-established government of President Corazon Aquino. A scarce book, especially signed!. Tall 8vo., pictorial boards in dust jacket; 451 pages. Illustrated.. Fine (covers nice; contents clean & tight); minor edgewear d/j. (Inventory #: 57369)
$250.00 add to cart or Buy Direct from Antic Hay Books
Share this item
Antic Hay Books
Offered by