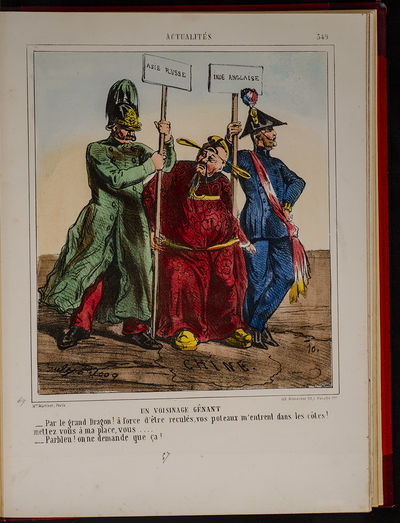 Folio (13 3/4 x 10 1/8 inches; 350 x 257 mm.). Twenty-eight fine and mainly amusing hand colored lithograph plates all heightened with gum arabic, and thirty-eight black and white lithograph plates making a total of sixty-six plates, all signed, numbered and titled ActualitÃ©s. All plates mounted on stubs. A few of the black & white plates and one color plate (No. 363) with light, mainly marginal foxing. One of the color plates (No. 133) lightly toned, and color plate No. 226 with neat marginal repair just touching image.

Note: Some plate numbers are duplicated but the plates are all different.

Pelcoq, Jules (1825-1887). "Jules Pelcoq (born in Belgium) was a Parisian book illustrator and colleague of HonorÃ© Daumier and contributed to Le Charivari and other French periodicals of the time. He also covered the French side for the Illustrated London News during the Franco-Prussian War. While covering the 1870 siege of Paris, Pelcoq dispatched his work by balloon to London. Wood engravings were then made from his sketches once they arrived in England. His work captures the attempt by Parisian troops to break through the surrounding Prussian army and the plight of citizens on the edge of starvation forced to eat animals from the Parisian zoo. Pelcoq often signed his name with pseudonyms such as: JipÃ© or Pipey

By the 19th century, caricature in France had become a highly evolved form of public discourse about famous figures (politicians, artists and writers, etc.) and the events of the day. During the 19th and early 20th centuries, French periodicals such as La vie Parisienne, Le journal amusant, Le petit journal pour rire and Le Charivari became well-known for the caricatures they published. Caricaturists (many of whom published under pseudonyms) themselves became public figures. (Inventory #: 05043)
$4,850.00 add to cart or Buy Direct from
David Brass Rare Books
Share this item

London: Printed for J. Brindley, 1751
(click for more details about Faerie Queene, The. With an exact Collation of the Two Original Editions, Published by Himself at London in Quarto; the Former containing the first Three Books printed in 1590, and the Latter the Six Books in 1596)
View all from this seller>