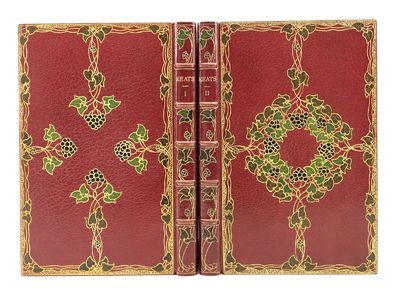 by (BINDINGS - DE SAUTY). (VALE PRESS). KEATS, JOHN
London: Vale Press, 1898. ONE OF 217 COPIES (as mentioned in the colophon; Tomkinson and Ransom list 210 copies on paper and eight on vellum). 235 x 145 mm. (9 1/4 x 5 3/4"). Two volumes. Edited by C. J. Holmes.
SUPERB CRIMSON CRUSHED MOROCCO, ELABORATELY INLAID, BY DE SAUTY (stamp-signed on front turn-ins) covers with gilt and inlaid frame of entwining grape vines, those on the front covers with vines meeting to form a wreath at center, those on the rear covers with clusters of grapes at center, emanating from extensions in the center of each sidepiece, raised bands, spine with inlaid and gilt grapevine rising through the panels, gilt titling, gilt-framed turn-ins, marbled endpapers, top edges gilt, other edges untrimmed. In (original?) red watered-silk chemises. Woodcut white-vine initials and intricate full borders on opening leaves, designed and cut by Charles Ricketts; title page designed by Charles Ricketts and cut by Bernard Sleigh. Ricketts, pp. xxiv-xxv; Ransom, p. 435; Tomkinson, p. 20. A breath of rubbing to a couple corners, but A SPARKLING SET inside and out.

This beautifully bound set offers the poems of the beloved Romantic poet in tastefully designed and printed volumes from one of the great private presses. Alfred de Sauty (1870-1949) trained briefly at the end of the 19th century at Riviere in London and subsequently made designs for the Hampstead Bindery and taught at the London County Council School of Arts and Crafts. He later emigrated, becoming manager of the extra bindery at R. R. Donnelley Co. in Chicago, where he became known as one of the most accomplished binders at work in the first third of the 20th century. As suggested by the present example, he was a binder with enormous technical skill and a refined imagination for design. Prideaux herself praised De Sauty in her "Modern Bookbindings," saying that "his work is of considerable merit. His inlays are distinguished for the taste shown in the association of colours, and his finishing has some of the brilliant qualities of the French school, seen particularly in the finely studded tooling of which he seems particularly fond." The Vale Press books, which Cave says were "far truer to the spirit of fifteenth-century printing than Kelmscott work," included nearly 50 titles issued during the eight-year life of the press, and both its impressive output and considerable artistic success can be attributed to the fact that Ricketts, who was remarkably skilled as a designer, painter, and illustrator, was in control of every facet of the operation. DNB tells us that Charles Ricketts (1866-1931) entered London's City and Guilds Art School in 1882, where he was apprenticed to the prominent wood-engraver Charles Roberts and where he met painter and lithographer Charles Haslewood Shannon (1863-1937), who became his lifelong partner. With the financial support of barrister Llewellyn Hacon and a £500 inheritance from Ricketts' grandfather, the partners set up the Vale Press in 1894. (For another title from the press, see item # 178, below.) Tomkinson notes that the graceful initials used here were unfortunately among the items destroyed in a fire at the press the year following our publication date.. (Inventory #: ST16436)
$15,600.00 add to cart or Buy Direct from
Phillip J. Pirages Fine Books
Share this item