Tisayac of the Yo semite; [Native American legend of Yosemite Valley, California] 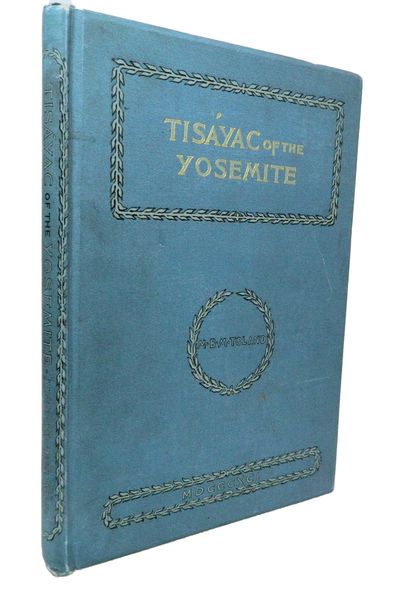 by Toland, M. B. M.
Philadelphia: J. B. Lippincott Company, 1891. First Edition. Very Good. [Copyright date of 1890] [9.25x6.75in]; [38] unpaginated, 11 illustrations with two in color, Six images of clay modeling including Title and copyright pages; Blue-gray cloth covers with beveled edges, Silver lettering on front in border laurel leaf design, silver lettering outlined in black on spine in same border design, Light Gray-green morie patterned floral doublure end papers, top edge gilt, fore and bottom edges untrimmed; Moderate shelf wear to edges and corners with some rubbing, soling and a few scratches to covers, no prior owner marks. [Currey-Kruska 330]. Mary Beth McKenzie Toland (1825?-1895) was an America author of poetry of romances, fantasy and legends. She and her husband, Dr. Hugh Toland, came to San Francisco in 1852 to be part of the adventure of settling California. Dr. Toland founded Toland Medical College in 1862 and oversaw the transfer of the college to the University of California. Mary Toland authored many books and pamphlets and Tisayac of the Yo semite was one of her last books.This books is a beautiful publication of her work with the additions of eight artists and sculptors. From the Lippincott Monthly (Vol. 46, December), "For several years a noteworthy feature of each holiday season has been the appearance of a narrative poem by Mrs. M.B.M Toland ... This year it is ... a romantic tale in tuneful verse, inspired by an Indian legend which Mr. Hubert Howe Bancroft has preserved. The legend traces the origin of the Bridal Veil Falls of the Yosemite to the hopeless love of To-to-ko-nu-la, a young brave, for the beautiful spirit Tisayac." The book was issued in three binding types - cloth, leatherette or full morocco.The images of the title page and other clay sculptures of John J. Boyle and A.L.R. Van Der Berghen and the contemporary artists and illustrators, Frederick Dielman, William H. Low, Hermann Simon, Rene T. de Quelin, H. Bolton Jones and Henry Sandham, add a visualization of the poetry and shows the beauty of the Yosemite Valley. The poetry tells the story of Tisayac, as the guardian angel of Yosemite and Toto'konu'la, as the smitten chief of the Ahwanechee. An introduction to the myth is from an excerpt from H. H. Bancroft, The Native Races of the Pacific States of North America, Volume III, 1875, (originally from Huchings Illustrated California Magazine, Volume iv, July 1859-June 1860).The Yosemite Valley in the California Sierra Nevada mountain range was home and a meeting place to several Native American tribes (Northern Paiute, Miwok and others). The Ahwahnechee people traditionally lived in the valley. There are many legends and myths of the valley, surrounding passes, ranges and mountains. Many of the modern place and feature names are from theses myths, such as Half Dome is Tesa'ak (or Tisayac) and El Capitan is Tutocanula ( or Toto'konu'la). (Inventory #: 13810)
$259.00 add to cart Available from
David Spilman Fine Books
Share this item