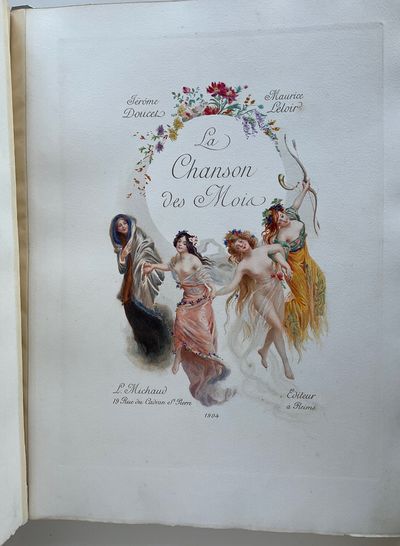 by Doucet, Jerome
Rhiems: L. Michaud, 1904. Hardcover. Very Good. Leloir, Maurice. LImited to just 165 copies, the first 15 of which were signed and numbered by Maurice Leloir. An extra suite of black and white plates, sans lettering, are bound in the back. In French.

Original publisher's binding in silk brocade with a repeating design. The spine is sunned to an even greenish shade and there is some loss of silk at the top and bottom. Gilt titles are still readable, and the covers themselves are quite fresh and bright.

There is a touch of foxing to the first two blank pages and the half title, then the rest is very clean. On a few pages, the color has offset slightly to the blank back of the previous page.

In December 1898, the Revue Illustrée published an insert detailing the program of publications planned for the coming year. This program gives pride of place to the publications of Jérôme Doucet, who had just taken up his post as 'Editorial Secretary', a title which covers intense editorial activity.

Each month of this book appeared in Revue Illustrée from 1901 to 1903, then they were collected into this book format. For this publication Maurice Leloir produced four additional watercolors: the title page, the half-title, the justification and the finished print, which brings the number of watercolors to forty.

It is one of the finest illustrated books of its day, or any day, highlighted by stunning printing that is often mistaken for hand-coloring. Printed on unfolded sheets of Arches Vellum paper.

"Finally, the Revue Illustrée has ensured the publication of thirty-six unpublished watercolors by Maurice Leloir which, under the title

THE SONG OF THE MONTHS,

will form the most adorable calendar possible and will be one of the seminal works of this universally admired Master. '

At this time, Maurice Leloir is indeed an admired Master; he has already published some of his great masterpieces: The Three Musketeers, in 1894, The Confessions, in 1889, Paul et Virginie, in 1888.

Each month is represented by a title plate, and two additional plates with verses by Doucet and magnificent illustrations by Leloir.

"In the Revue, Leloir's watercolors were engraved by Auguste Mathieu and published in different shades, but always monochrome.This "defect" was corrected for the book: the watercolors were printed in photogravure by Dujardin, in very light shades, then colored by A. and E. Charpentier; each copy is reviewed and retouched by Maurice Leloir. The rendering is spectacular. The wood engravings, by Auguste Mathieu, will not be used for this, but they will be printed on china, and attached to all copies."

Having examined two copies side by side, I have to say that the note above that they were "reviewed and retouched by Maurice Leloir" holds true, as the colors do vary on the same plate from one copy to the other. So I would say this is partially hand-colored.

"The price of the copy is set at 600 francs, and the leading copies are at 1,500 francs. A single copy, bringing together all of Leloir's watercolors, is sold at 25,000 francs. All master copies are subscribed before publication."

"These are considerable sums in 1904: several months' wages for a worker. The bibliophile works offered at this price level are extremely rare: this same year, the leading edition of Catulle Mendès' book, Hespérus, illustrated by Carlos Schwabe, published by the Société de propagation du livre d'art, is a subscription to 225 francs. Maurice Leloir had already published a comparable work: Une femme de qualité au siècle [A Quality Woman in the Last Century], at Boussod-Valadon, in 1899, 200 copies were printed, with eighty-seven color plates; the first copies sold for 2000 francs."

As a long-time collector of illustrated books, I can say this is one of the most magnificent I've ever had the pleasure to come across. The printing, the quality of the illustrations, the rich, lavish colors, the paper, the size, all work together to make this one of the finest productions of the early 20th century. I wouldn't be selling this if I didn't have already a copy of my own. No copies are to be found currently online. -Bud (Inventory #: 28064)
$3,500.00 add to cart Available from
Bud Plant & Hutchison Books
Share this item

Please allow for 7.0375% state sales for shipping within California. Books are returnable for any reason if we are notified of intent to return within 5 days of receipt.
More from this seller