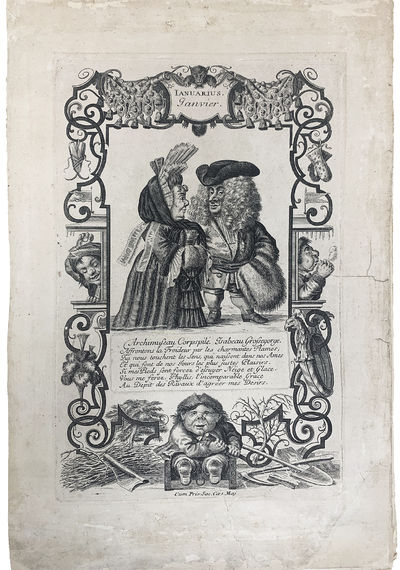 by [ENGELBRECHT, Martin]
A suite of 12 engravings, with 'Cum Priv. S. C. Maj.' printed on the bottom of each plate [Cum Privilegio Sacrae Caesareae Majestatis', the privilege of the Holy Imperial Majesty (Holy Roman Empire)]. The August plate is dated 1715 in the bottom decorative border. 30 x 19 cms (to plate mark), sheets measure 40 x 25 cms.; a few mends to corners & edges, two neat marginal repairs extending beyond platemark – the one in January sheet just entering platemark, but not touching printed image, the other in December sheet crossing image; some scattered soiling, general toning; richly printed strikes.
A very rare French text edition of a suite of 12 satirical engravings attributed to Martin Engelbrecht (1684-1756), one for each month, depicting dwarfs in fashionable European attire humorously caught in various seasonal activities or poses commonly associated with a particular time of year. Issued without a title page, we have simply entitled the series [Twelve Months]. Each plate consists of two interacting characters, each given an amusing title accompanied by six lines of French satirical verse beneath. The changing seasons are expressed with representations of the many pleasures of life and the activities which support them: eating and drinking, smoking, gardening, romance, hunting, etc. February is the season of the Carnival and masquerade; March is for speaking with the gardener preparing for spring; April is for holding one's cap on one's head in the breeze; May for serenades in the garden, etc. Each engraving has a decorative border filled with delightful seasonal imagery and playful grotesques of a humous nature associated with each month. According to the British Museum catalogue (see ref. below), each print is composed of two plates -- one for the central motif and another for the border: this arrangement, presumably, gave the publisher Engelbrecht the flexibility to change the central image and language while leaving the borders intact.
One of the most prolific German Baroque engravers and publishers, Martin Engelbrecht was based in Augsburg, a major center of European publishing at this time. The prints derive from Jacques Callot's enormously popular Varie figure gobbi. Designed in Italy in 1616 and published in Nancy in 1622, they became the subject of renewed interest in the early eighteenth century, first in Germany and then in the Netherlands and England. However, unlike the Callot prints, which were produced without text, Engelbrecht's engravings include short satirical verses – a feature that contributed to the series' popularity. The Twelve Months along with Engelbrecht's Il Callotto Resuscitato, Augsburg, 1710 has been called"perhaps the most important publication from this second wave of post-Callot dwarfish prints" [Wentz, p. 166].
The influence of these Callot-inspired dwarfs on book illustration and the decorative arts – porcelain production, textiles, and garden sculpture – continued well into the nineteenth century (Verfondern, "Das 'neueingerichtete Zwergenkabinett' und seine Schoepfer," p. 100). Engelbrecht's prints led to a proliferation of "Dwarf gardens" in the second decade of the eighteenth century particularly in the German-speaking world. For example, the woman with a muff from the January print was used as a model for a "Dwarf sculpture garden" in the Greillenstein estate in Lower Austria, while a sculpture closely resembling her companion can be found in Ptuj in Slovenia (Verfondern, "Das 'neueingerichtete Zwergenkabinett' und seine Schoepfer," p. 118). The influence of dwarfish prints on porcelain has also been documented: for example, there are several figurines at the Met modelled after the Il Callotto Resuscitato series (The Jack and Belle Linsky Collection in the Metropolitan Museum of Art, pp. 312-316.)
Although the prints do not bear an indication of engraver, publisher or date of publication (except for the August print which is dated 1715), Verfondern dates the series to 1715 and identifies the publisher as Martin Engelbrecht in Augsburg. The series was re-engraved and published the following year at Amsterdam by Wilhelm Koning (Verfondern, "Das 'neueingerichtete Zwergenkabinett' und seine Schoepfer," pp. 114, 117 and 137). The two editions are easily distinguishable, having different decorative borders and the names of the months in the Koning edition are in Dutch.
We have not located any copies of the French language edition of Twelve Months in the U. S. The British Museum holds a complete suite of the French language edition identical to ours which has been pasted into an album containing Il Callotto Resuscitato. There are also three plates from the suite in the Wellcome Collection. A copy of the German language edition of the Twelve Months is in the Beinecke Library with an erroneous title-page, catalogued under Der Menschen Zung und Gurgel Weid [1715].
*Not in Schott, Der Augsburger Kupferstecher und Kunstverleger Martin Engelbrecht und seine Nachfolger (1924). Verfondern, "Das 'neueingerichtete Zwergenkabinett' und seine Schoepfer," and Bauer, "Barocke Zwergenkarikatur," in Barocke Zwergenkarikaturen von Callot bis Chodowiecki, pp. 39-73 and 99-124. "Curator's Comments" in BM [British Museum] 1938,0617.1 and see online https://www.britishmuseum.org/collection/object/P_1938-0617-12-1. Wentz, "Deformity, Delight and Dutch Dancing Dwarfs: An Eighteenth-Century Suite of Prints from The United Provinces," Music in Art, vol. 36: 1/2 (2011), pp. 161–200. The Jack and Belle Linsky Collection in the Metropolitan Museum of Art (1984). (Inventory #: 6043)
$4,850.00 add to cart Available from Martayan Lan
Share this item
Martayan Lan, Inc.
Offered by