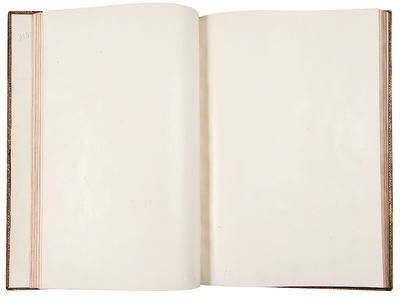 90 blank sheets of laid paper with the watermark of a French/Dutch papermaker, in a beautiful red morocco binding.

This watermark originates from the mills of Jean Villadary [or Villedary], a French papermaker in Angoumois, Vraichamp, Beauvais or La Couronne. From 1668 to 1758, the firm was active in France and afterwards, they owned a paper mill in Hattem, Gelderland, in the Netherlands, until 1812. A law passed in 1688 regulating paper manufacturing ruled that the initials and name of papermarks had to be added to the watermark on every sheet of paper made. The name or initials VI (or IV) can be found over a period of 150 years, during which they became known as a hallmark of excellence.