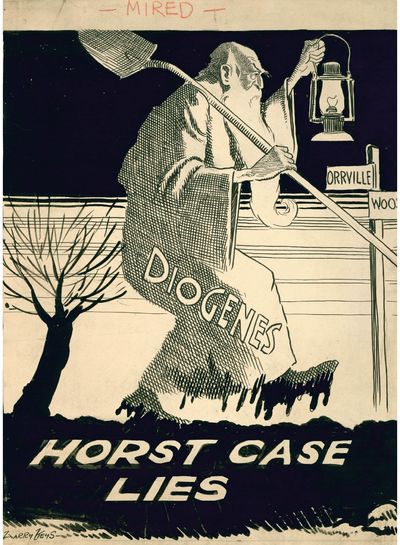 by Keys, Harry J., artist
Columbus, Ohio, ca. 1929. Original pencil and ink drawing on thin card stock, measuring 15" Ã— 12.5". Light overall wear; still about very good. Original ink drawing by longtime Ohio newspaper cartoonist Harry J. Keys (born 1886), which depicts the Greek philosopher Diogenes trudging through mud. In the background, a road sign bears the names of the towns Orville and Wooster, and above is written the bold-lettered message "HORST CASE LIES," referring to the highly publicized trials about the 1928 disappearance of four-year-old Melvin Horst of Orville. Horst was never found and the case remains unsolved to this day. It came to stand as one of the earliest child abduction cases in the United States, the oldest unsolved case of its kind in Ohio, and one that, due to its enduring high profile in the local imagination and reputed links to organized crime, remarkably remains an open and active investigation.Keys was staff cartoonist of the "Columbus Citizen" in the time following Horst's abduction and the ensuing trial of a local bootlegger group convicted in 1929. Their conviction would be overturned due to faulty witness testimony. Keys later replaced Billy Ireland at the "Columbus Dispatch", taking over his vaunted Sunday comic strip "The Passing Show" after Ireland's death in 1935.A striking drawing documenting a prominent Ohio criminal case.Two further original drawn caricatures are held by the Library of Congress. (Inventory #: 51229)
$750.00 add to cart or Buy Direct from
Bernett Penka Rare Books
Share this item