HISTORY IN BRIEF OF 'LEOPARD' AND 'LINDEN" GENERAL GRANT'S ARABIAN STALLIONS PRESENTED TO HIM BY THE SULTAN OF TURKEY IN 1879 ALSO THEIR SONS 'GENERAL BEALE', 'HEGIRA', AND 'ISLAM' BRED BY RANDOLP HUNTINGTON. ALSO REFERENCE TO THE CELEBRATED STALLION 'HENRY CLAY' 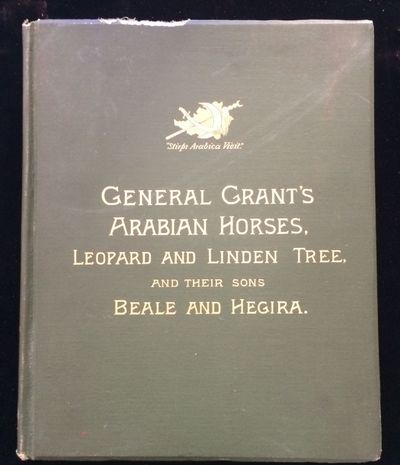 by Huntington, Randolph
J. B. Lippincott Company, 1855. 1st Edition. Hardcover. Very Good. 4to, publishers' green cloth, with gilt titles and Turkish seal front cover, beveled edges, gray polished endpapers, aeg, 66 pages, illustrated. Front hinge partially revealed, still solidly boung, 2" stretch from rodent munch top edge front cover, internals fine. Gift inscription to Wm. H, Caitlin from Hebert Sherman(?) front fly. Ex-libris of Frank K. Sturgis (1847 - 1932) with his bookplate on the front pastedown. Sturgis was an American banker who served as president of the New York Stock Exchange and was a prominent member of New York society during the Gilded Age;.both Sturgis and his wife were both included in Ward McAllister's "Four Hundred", purported to be an index of New York's best families. Sturgis, a well-known sportsman, was a member of the Coaching Club and served as its president in 1916. He was a member of the Board of Directors of the Coney Island Jockey Club, operators of the Sheepshead Bay Race Track. He bred horses and served as president of the National Horse Show Associations, Madison Square Garden (from 1891 until it dissolved in 1912), and the American Society for the Prevention of Cruelty to Animals. HORSES ARABIAN BREEDING EQUESTRIAN. (Inventory #: 012294)
$500.00 add to cart or Buy Direct from
Johnnycake Books
Share this item

Done in the Open

by Madonna. Meisel, Stephen (photography by)

NY : Warner Books , 1992
(click for more details about SEX)
View all from this seller>