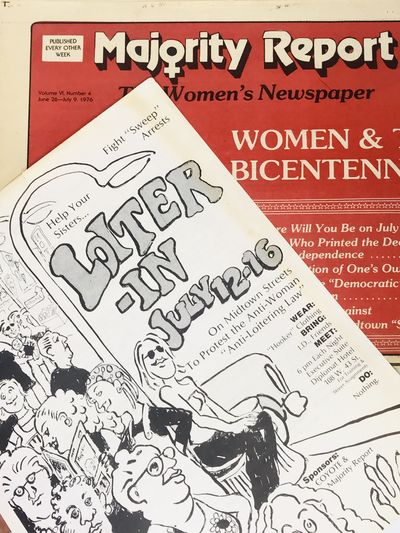 by [JAMES, Margo St.]
1976. Double-sided flyer requesting like minded ladies to "Help Your Sisters..." & to "Fight 'Sweep' Arrests." The Law, "Loitering for the purpose of engaging in prostitution" was enacted on June 10, 1976, making it possible for police to arrest prostitutes without any evidence of solicitation. Enacted to purge the streets of black and brown women before the Democratic National Convention, this law was only recently - February 8, 2021 - repealed! For decades, law enforcement has used this constitutionally dubious statue to target women, transgender, and non-binary people, making it a crime to exist in public spaces. The flyer, sponsored by COYOTE & Majority Report urges ladies to "Wear 'Hooker' Clothing", and "Do: Nothing." Flyer's verso is a FACT SHEET ON ANTI-LOITERING LAW with 12 facts and contact information for Margo St. James. Ms. St. James (1937-2021) who called herself a sex-positive feminist, founded the group COYOTE (Call Off Your Old Tired Ethics) to press for health care, legal rights and financial security for sex workers. Lightly toned, small closed tears head.

Majority Report, The Women's Liberation Newspaper - Vol VI, Number 4, July 26 - July 9, 1976. 16 pages.
Headline: Women & The Bicentennial - Where will you be on July 4th, 1976, Guess Who Printed the Declaration of Independence, A Declaration of One's Own, Women & the 'Democratic" Convention, and Feminists Act Against Midtown 'Sweep.' Interior features two articles concerning the Loiter-In describing St James' leaflet as well as a call for a "Hooker Lobby" in Washington DC. Light toning to paper.
Majority Report, The Women's Liberation Newspaper - Vol VI, Number 5, July 10 - July 23, 1976 (Convention Edition)16 pages. Headline: Elizabeth Ray & Jimmy Carter, Fight for Prostitutes' Rights... Volunteer to Do Absolutely Nothing, Is Your Job Killing You?, Man Speaks With Forked Tongue, and Prostitution; It's Now Illegal to Be a Women in Public. Spectacular Loiter-In Poster in centerfold. Toning to paper, small closed tear at crease. (Inventory #: 2470)
$375.00 add to cart Available from
lizzyoung bookseller
Share this item