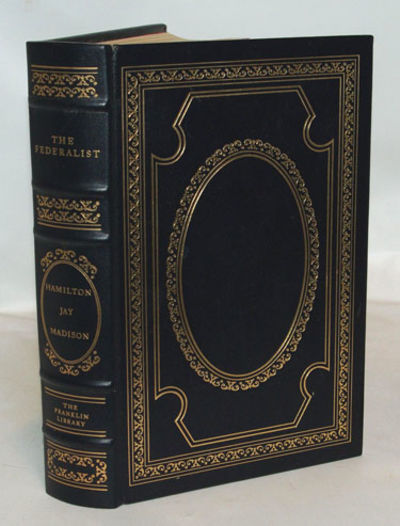 by Hamilton, Alexander, James Madison and John Jay
Franklin Center: The Franklin Library, 1977. Limited Edition. Fine in full black leather covered boards with five raised bands on the spine with gilt text and decorations in the compartments and with gilt tool work on both the front and rear boards. The end papers are bright red silk and there is a matching silk placement ribbon sewn-in at the head of the spine. The edges of the text block are all gilt. An octavo measuring 9 by 6 inches containing 654 pages of text. With the apparent failure of the Articles of Confederation to allow the new nation of the United States to effectively govern itself it became apparent in May of 1787 that the Articles would have to be replaced by a more resilient and cohesive document. This gave rise to the creation of what we now know as the Constitution of the United States. Once the document was drafted it was necessary to have it accepted by at least nine states before the new government could take control. Each state in the then Union was permitted to either approve the document or reject it and if rejected go on its way on its own. The state of New York was considered critical to the adoption process. The authors of the Federalist Papers, Alexander Hamilton, James Madison and John Jay saw the importance of encouraging the voters of the state of New York to approve the new Constitution. To this aim they each created essays, written under a single pseudonym, which were published in various New York newspapers. The resulting assemblage became known as the Federalist and has since been considered one of the three most important documents produced by the United States. Even Thomas Jefferson "acclaimed The Federalist as 'the best commentary on the principles of government ever written,' and it has often been quoted in Supreme Court decisions." (Introduction of this title.) This is one of the Franklin Press's volumes in their series The 100 Greatest Books of All Time. Unlike the original document this version attributes each essay to its author. (Inventory #: TB31782)
$80.00 add to cart Available from
Town's End Books
Share this item

Franklin Center, Penn. : The Franklin Library , 1977
(click for more details about The Caine Mutiny)
View all from this seller>