The Contentes of this Boke. Fyrst the Booke that Teacheth to Kepe.. 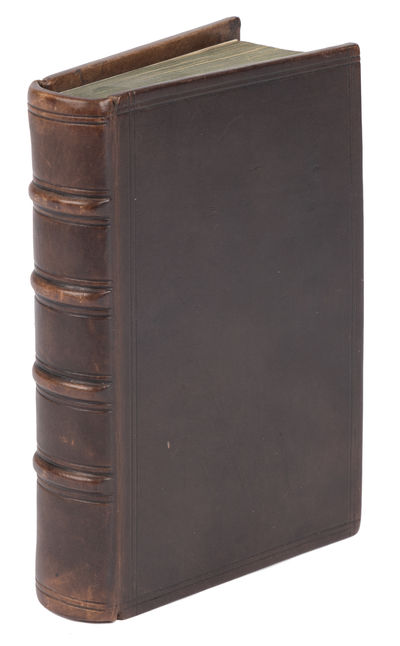 by Great Britain; Justices of the Peace; Courts Leet
1559. London, 1559.. London, 1559. "The Booke That Teacheth" [Great Britain]. [Justices of the Peace]. [Courts Leet and Baron]. The Contentes of This Boke. Fyrst the Booke for a Iustice of Peace. The Boke that Teacheth to Kepe a Courte Baron, Or a Lete. The Boke Teachynge to Kepe a Courte Hundred. The Boke Called Returna Brevium. The Boke Called Carta Feodi, Conteynynge the Forme of Dedes, Releasses, Indentures, Obligacions, Acquitaunces, Letters of Atturney, Letters of Permutacion, Testamentes, And Other Thynges. And the Boke of the Ordinaunce to be Observed by the Offycers of the Kynges Escheker for Fees Takinge. [London: In Fletestreete within Temple barre, At the Signe of the Hande and Starre, by Richard Tottil, The XIII. Daye of Maye. Anno Domini 1559]. 195, [11] ff. Lacking Final two blank leaves. Octavo (5-1/4" x 3-1/2"). Recent period-style calf, blind rules to boards, raised bands to spine, endpapers renewed, blank interleaves added in a few places. Moderate toning, edges trimmed, touching headlines in a few places, worming with occasional minor loss to text, repairs to corners of a few leaves. Faint stain and faint fragment of an annotation to final leaf, early (illegible) owner signatures to title page. $2,500. * First printed in 1505 by Richard Pynson, this is a handy anthology of treatises for justices of the peace, sheriffs, bailiffs. It includes the Carta Foedi and exchequer ordinance. It is sometime attributed erroneously to Sir Anthony Fitzherbert. OCLC locates 5 copies of this edition in North American law libraries (Columbia, Harvard, LA County, Library of Congress, University of Minnesota). English Short-Title Catalogue S102175. Beale, A Bibliography of Early English Law Books T154. (Inventory #: 71711)
$2,500.00 add to cart or Buy Direct from
Lawbook Exchange
Share this item

A Treatise of the Pleas of the Crown; Or, A System of the Principal..

1724
(click for more details about A Treatise of the Pleas of the Crown; Or, A System of the Principal..)