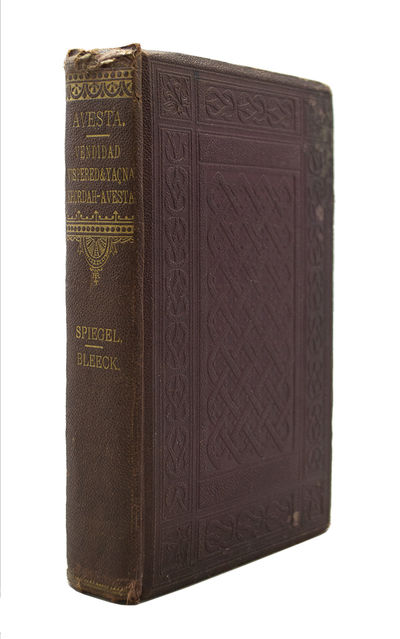 by BLEECK, Arthur Henry
First Edition in English of the Avesta BLEECK, Arthur Henry, translator. [VON SPIEGEL, Friedrich, author]. Avesta: The Religious Book of the Parsees; from Professor Spiegel's German Translation of the Original Manuscripts. In Three Volumes. Hertford: Printed for Muncherjee Hormusjee Cama, By Stephen Austin, 1864. First edition in English of the Avesta. Three octavo volumes in one (8 3/16 x 5 3/8 inches; 212 x 135 mm). xxiv, 156; 141, [1, blank]; 214 pp. Text in English. Translated into English from the German translation of the texts by Friedrich von Spiegel. With half title. Aside from this copy, we could find no other copies at auction in over 50 years. Publisherís original maroon morocco-grain cloth. Boards stamped and tooled in blind. Spine stamped and lettered in gilt. Head and tail of spine with some shelf-wear and fraying. Some minor soiling to front board. Spine lightly sunned. Some minor toning to text and a bit of light foxing to preliminaries. Overall a very good copy. ìThe Avesta is the scripture of Zoroastrianism which developed from an oral tradition founded by the prophet Zoroaster (Zarathustra, Zartosht) sometime between c. 1500-1000 BCE. The title is generally accepted as meaning ìpraiseî, though this interpretation is not universally agreed upon. The original prayers and hymns were composed in a now-extinct language known as Avestan (which takes its name from the work) that was only preserved orally until the Sassanian Empire (224-651 CE), which committed it to writing by essentially inventing an alphabet to convey Avestan based on Aramaic script." (Ancient dot eu). ìZoroastrianism or Mazdayasna is one of the world's oldest continuously practiced religions. It is a multi-faceted faith centered on a dualistic cosmology of good and evil and an eschatology predicting the ultimate conquest of evil with theological elements of henotheism, monotheism/monism, and polytheism.î [PBA]. ì[Bleeck] was for some time in the British Museum, where his remarkable linguistic capacity rendered him very useful. He had a wide knowledge of both oriental and European languages. He afterwards went out to the East during the Crimean War, and until the conclusion of peace held a post in connection with the Land Transport Corps at Sinope on the Black Sea, where his co-author, William Burckhardt Barker, was also stationed. Refused readmission to the British Museum on his return to England, Bleeck worked for several years for a prominent Parsi merchant, Muncherjee Hormusjee Cana, who employed him to prepare an English version of the Avesta, the religious books of the Parsis, who were Zoroastrians, from an existing German translation. He performed the task well, publishing the work in 1864 in three volumes.î (Oxford DNB). HBS 68458. $1,250 (Inventory #: 68458)
$1,250.00 add to cart Available from
Heritage Book Shop
Share this item