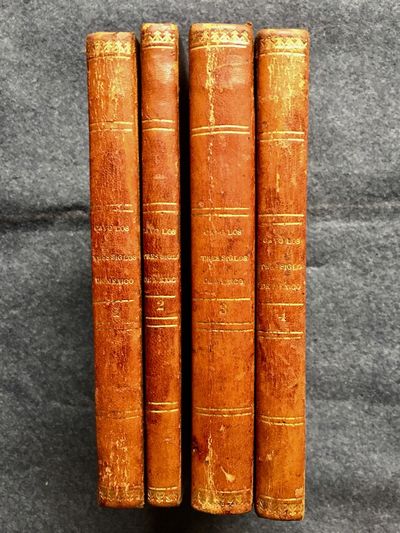 by Cavo, Padre Andres and Carlos Maria de Bustamante.
Mexico: Abadiano y Valdes, 1836 - 38. First edition. 4 vols. 4to, viii, 281; 158; viii, 419; viii, 281 pp. Vols. 1-2 edited by Bustamante from the MS: Historia civil y politica de Mexico; vols. 3-4 constitute the editor's supplement. The work is ofrten bound in two volumes, but here we have it in four. Cavo was a Jesuit, a native of Mexico, and expelled from the country along with the others of his order in 1767. Although he made a great effort to return to Mexico later in his life, dissociating himself from the Jesuits and travelling to Spain to do so, but he did not succeed. The rest of his life was spent in Rome where he died in great poverty in 1803. Beristain de Souza has almost nothing to say about him, as his work was not discovered until the 1830's, when Bustamante ran across the manuscript in a private episcopal library and theeafter took charge of having it published, with his additions.The first two books are Cavo's, up to the expulsion, and, despite the title, is a history of viceregal Mexico City.Wikipedia says: "The work is not a history in the usual sense. It is better described as the annals of Mexico City, with particular emphasis on the development of political ideas. The book also contains details of colonial life that are not available in any other source. Cavo shows signs of Mexican (not Spanish colonial) nationality, and for this reason is considered a forerunner of Mexican independence. Porrua (Diccionario) states that his was the first history of Viceregal Mexico. The last two volumes are by Bustamante, himself an important Mexican historian after independence, associated with the liberal party, and they are a continuation up to 1821, being of a broader scope and containing some important documents also not published before. Bound in contemporary calf leather over speckled boards, titles and fillets in gilt on spines. Very good set. (Inventory #: 7554)
$1,750.00 add to cart Available from Plaza Books
Share this item

Picturesque Mexico. The Country, The People, The Architecture

Berlin : Atlantis , [1925]
(click for more details about Picturesque Mexico. The Country, The People, The Architecture)