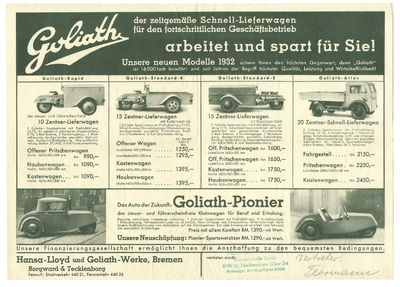 by Hansa-Lloyd und Goliath-Werke
Bremen: Hansa-Lloyd und Goliath-Werke Borgward & Tecklenborg, 1932. Very good. Broadside; oblong 8 1/4 x 11 1/2; thin, off-white stock, printed in olive green and illustrated with monochrome photographs; a small, closed cut to bottom edge; two faint, intersecting creases through the middle; green stamp of the company and a small, penciled-in note to bottom margin; in very good condition.Carl F. W. Borgward (1890 - 1963), a German engineer and designer, began his career in 1921, when he founded the Bremer Kuhlerfabrik Borgward & Co. and began manufacturing car radiators in Bremen. In 1924, his first automotive design was a small, three-wheel vehicle, the Blitzkarren, or "Lightning Cart," which was used by couriers. In 1929, Borgward partnered with Wilhelm Tecklenborg, acquired the Bremer Hansa Lloyd Werke (a company, established in 1905 and already successfully manufacturing light cars), and thus, co-founded the Borgward Group. Initially developing small trucks, the two came up with their first three-wheel passenger car - the Goliath-Pioneer in 1932 - advertised in the current broadside. In the same year, the company was renamed Hansa-Lloyd und Goliath-Werke Borgward & Tecklenborg. Although very successful, the business had to shift production to military vehicles during the Second World War and in 1944, their Bremen factory was completely obliterated by bombs. Apart from the Goliath-Pioneer, the broadside also advertised, with specifications and prices, the Goliath-Lieferwagen, the Goliath-Standard-K, the Goliath-Standard-S, and the Goliath-Atlas. (Inventory #: 002888)
$200.00 add to cart Available from ZH Books
Share this item
ZH Books
Offered by