The History and Adventures of the Renowned Don Quixote. Translated from the Spanish of Miguel de Cervantes Saavedra. To which is prefixed, Some Account of the Author’s Life. By T. Smollett, M.D. 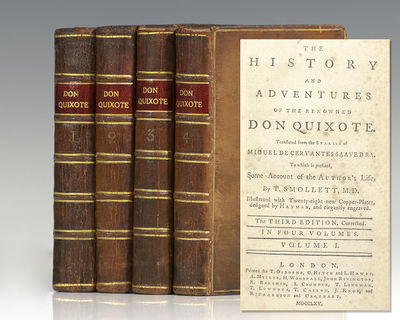 by Cervantes Saavedra, Miguel de
London: Printed for T. Osborne, C. Hitch and L. Hawes, A. Millar, H. Woodfall, John Rivington, et al, 1765. The third edition of Smollett's translation of Cervantes' masterpiece. Octavo, four volumes bound in full contemporary calf with red morocco spine labels lettered in gilt, gilt ruling to the spine in six compartments within raised bands, gilt ruling to the front and rear panel, illustrated with twenty-eight copper plates by Hayman including frontispiece. In very good condition. Often cited as the first modern novel, Cervantes' masterpiece Don Quixote remains not only the most influential work of literature to emerge from the Spanish Golden Age, but the most important work of the entire Spanish literary canon. "It is interesting to realize that the first modern novel was composed by a sick, aged and impoverished man, who believed that a satirical tale might produce more revenue than the poems and plays that he regarded as his more serious mission. Under the guise of a parody on romances of chivalry, Cervantes created a study of reality and illusion, madness and sanity, that links him with such acute 16th-century students of psychology as Erasmus, Rabelais, Montaigne, and Shakespeare" (Folger's Choice 30). (Inventory #: 122788)
$1,500.00 add to cart or Buy Direct from
Raptis Rare Books
Share this item