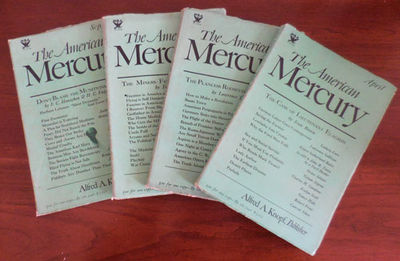 by Hazlitt, Henry, Editor (Robert Frost, Nelson Algren, Conrad Aiken, Thomas Wolfe, William Saroyan, Franz Boas, Thomas Beer, Sigrid Undset et al, Contributors)
New York: Alfred Knopf, 1934. First edition. Paperback. Good +. Sold here together are four issues of The American Mercury, a politics and literary magazine that was edited by Henry Hazlitt. The four issues are the April, May, June and September 1934 issues. All in fairly typical good to very good condition for their age. The yapped edges of the covers are typically a bit worn. There is a stain to the front cover of the September issue. With the usual line-up of high quality and well-known contributors throughout from folks like Grace Allen, Ivan Bunin, Lawrence Dennis, Robert M. Coates et al. (Inventory #: 30842)
$80.00 add to cart or Buy Direct from Derringer Books
Share this item
Derringer Books
Offered by

The Double Dream Of Spring