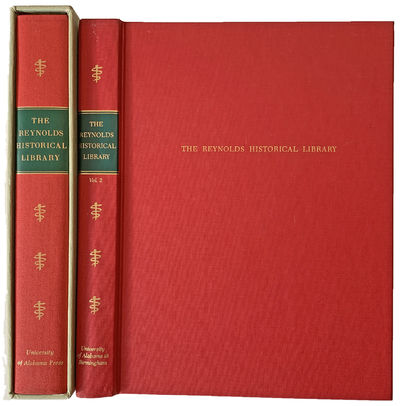 by Reynolds Historical Library.
Birmingham, AL:: University of Alabama Press, 1968, 1994., 1968. 2 volumes. Tall 8vo. xxiv, 495, [1]; xviii, 309, [1] pp. Frontis. port., plates (some in color), index. Red gilt-stamped cloth, decorative slipcase (vol. 1). Very good+. Commemorating the substantial gift of Dr. Lawrence Reynolds (1889-1961) and his history of medicine library to the University of Alabama. The publication of this handsome and expertly prepared volume assures Dr. Lawrence Reynolds a documented place in the roster of physician-bibliophiles whose collections enrich the shelves of fortunate recipient libraries. A graduate of the University of Alabama and the Johns Hopkins School of Medicine, Dr. Reynolds was the first resident in radiology at Hopkins and later, instructor in roentgenology at Harvard. In 1922, he went on to the Harper Hospital in Detroit and a distinguished career spanning half a century as radiologist, editor, and teacher. In addition, he was a tireless and knowledgeable collector of rare medical books. It is said that his interest in this activity was first aroused by reading Osler's works and was further stimulated by personal contact with Harvey Cushing. By the time of his death in 1961, Dr. Reynolds had collected more than 5,000 items of medical historical interest. In 1958, he had generously given the collection to the University of Alabama where it was deposited in a special wing added to the Medical Center Library and named the Reynolds Historical Library. / The catalog of the Reynolds Library is divided into five sections of continuously numbered entries: Incunabula (items 1-29), Main Collection (30-4503), Daniel Drake Collection (4504-4647), Dental Collection (4648-4992), and Manuscripts (4993-5119). There are name and subject indexes, an account of the nine ivory medical mannikins in the collection, and two short appreciations of Dr. Reynolds. Twenty-seven plates, some in color, illustrate interesting features of the collection. All the items listed are the gift of Dr. Reynolds except those in the Dental Collection. The Daniel Drake Collection, at the time it was assembled, "contained all the material by and about Daniel Drake." / The Main Collection, the largest segment of the Library, is wide in scope. Many medical classics and most of the great medical names are represented-Hippocrates, Galen, Avicenna, Vesalius, Pare, Harvey, Jenner, Laennec, to name a few. The Americana listed in this section are surprisingly numerous and include many fine items. For example, there is a copy of the rare 1708 Boston edition of Culpeper's English Physician which, if exception is made of the earlier pamphlets of physician-divines like Thomas Thacher and Cotton Mather, must probably be considered the first medical book printed in the British North American colonies. Some of the other Americans represented are Waterhouse, Rush, Beaumont, and especially Oliver Wendell Holmes. As might be expected, historical material in Dr. Reynolds own specialty forms an important part of the collection. Included are publications on the sciences of magnetism and electricity by Gilbert, Franklin, Galvani, Volta, Ampere, Faraday, and others, which provide an introduction to the later writings of Roentgen, the Curies, and more recent contributors to radiology. . . . The usefulness of catalogs of medical historical collections to researchers and librarians has been reaffirmed recently by the appearance of the first volumes of multi-volume listings of the early works in the Wellcome Historical Medical Library and the National Library of Medicine. The catalog of a personal library like the Reynolds Library is more than a guide or a cataloging aid. It reflects the interests and tastes of its collector and thereby serves to reveal additional facets of his personality much more clearly than the simple statement: "He was a bibliophile." - JANET B. KOUDELKA, Baltimore, Maryland. – [review] Bulletin Medical Library Assoc. 1969 Apr; 57(2): 227–228. (Inventory #: PW1608)
$80.00 add to cart Available from
Jeff Weber Rare Books
Share this item