“The Soul exploring the recesses of the Grave.” A single plate from Robert Blair's The Grave. 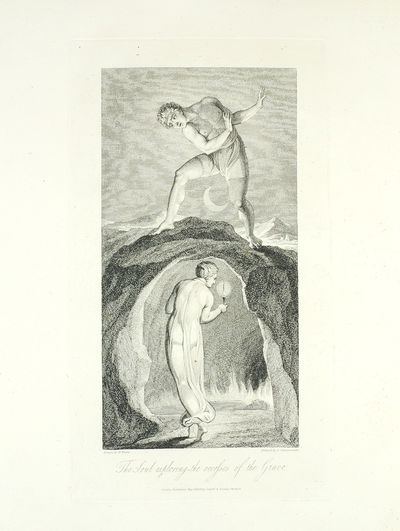 by Blake, William. Blair, Robert.
Single plate. London: Cadell and Davies, 1808. Single plate, etching on wove unwatermarked paper, full margins cleaned. § From the first 4to edition. One of Blake's most memorable images. It was designed by Blake and engraved by Luigi Schiavonetti. Bentley, Blake Books, 435b."In October 1805, Blake was commissioned by the engraver and would-be publisher Robert H. Cromek to prepare forty drawings illustrating Robert Blair's The Grave, a popular "Graveyard" school poem first published in 1743. Cromek planned to select twenty of these designs for a deluxe edition of the poem. In Cromek's first prospectus of November 1805, Blake is named as both the designer and engraver of fifteen designs. Blake etched one image, Deaths Door, in white-line, but Cromek rejected it. The dark power of the white-line print appeals to modern tastes, but was far from fashionable in the early nineteenth century. In a second prospectus, also of November 1805, Cromek announced that Luigi (or Louis) Schiavonetti would engrave twelve designs for the new edition. Blake had lost the potentially lucrative commission to engrave his own designs; his relationship with Cromek descended into anger and argument. In spite of their disagreement, Cromek included a portrait of Blake as a frontispiece to the volume, published in 1808. Cromek promoted the book aggressively and the illustrations to The Grave became Blake's best known work through much of the nineteenth century." (The William Blake Archive) (Inventory #: 123891)
$475.00 add to cart or Buy Direct from
John Windle, Bookseller
Share this item