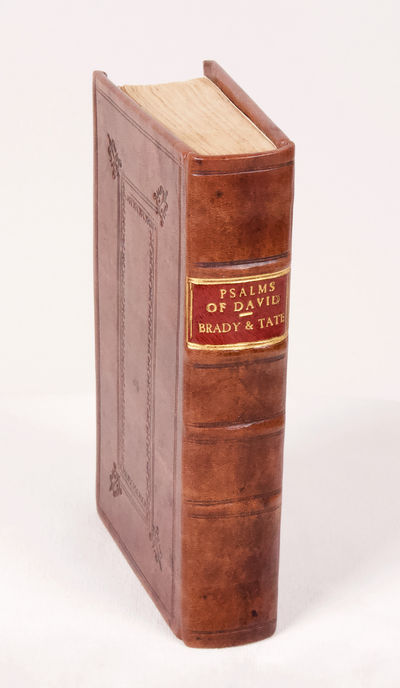 by BAYLEY, Daniel 1729-1792
Newbury Port: Printed & sold by the Author in Newbury Port & by most Booksellers in Boston, 1771. Small octavo. Newly bound in full dark brown panelled calf with spine in blindruled compartments with dark red title label gilt. 1f. (recto title within decorative border, verso "The Name of the Notes," "Lesson for Tuning the Voice," and "The Table"), 18 pp. Engraved throughout.

With 62 compositions, primarily for 3 voices but some for 2 and 4, textless, no attributions, one traced to an American source (Psalm 100 New), 55 traced to non-American sources, 6 unidentified, 33 in the core repertory.

Upper margins trimmed, affecting titling ("The Name of the Notes") to head of page 2 and titling of tunes but not affecting notation. Browned, as usual, more heavily to upper and outer margins of last two leaves; very occasional minor foxing.

Bound, as often, with:
Brady, N. and N. Tate. A New Version of The Psalms of David, Fitted to the Tunes used in Churches. Boston: Printed for, and Sold by A. Barclay, at the Gilt Bible in Cornhill. 1771. 1f. (recto title, verso blank), [3]-276 followed by Appendix, Containing A Number of Hymns, Taken chiefly from Dr. Watt's Scriptural Collection. Boston: Printed and Sold by John Boyles, in Marlborough-Street. 1771. 1f. (recto title, verso blank), 3-84 pp. Browned and slightly foxed. Second edition of The Essex Harmony, the first edition of which was published one year earlier. Warrington: Books Relating to Psalmody p. 42. Hixon: Music in Early America p. 30. Evans 11979. Metcalf: American Psalmody p. 12. ASMI p. 137.

"In the decade preceding the [Revolutionary] war, Bayley was by far the most active American compiler and publisher, accounting for some two-thirds of the 21 sacred music collections that survive from the years 1764-74. His tunebooks introduced to New England a large repertory of mid-century British sacred music, including several works that came to be standard favorites." Grove Dictionary of American Music Vol. I, p. 163. (Inventory #: 36237)
$4,180.00 add to cart or Buy Direct from
J. & J. Lubrano Music Antiquarians
Share this item