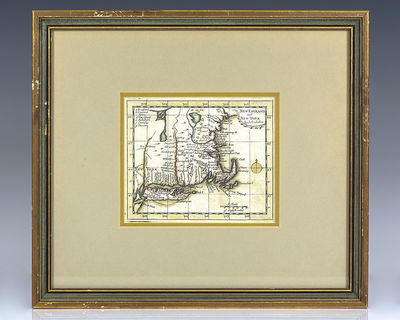 by Seller, John
London: Seller, Price & Senex, 1703. Rare 17th century John Seller map of New England and New York from Daniel Fenning's A New System of Geography. One page, with intricate topographical details and hand-colored borders, the map displays the eastern portion of New York and New England and includes Long Island, Martha's Vineyard, Nantucket, Block Island, and Rhode Island. In near fine condition. Seventeenth century English cartographer, compass maker, and map seller John Seller was appointed hydrographer to the King in March of 1671. In that year he published his first volume of charts and sailing directions, The English Pilot, which would run through many editions until the end of the eighteenth century. The trade in maritime maps and charts had until then been dominated by the Dutch. Seller additionally published several textbooks and nautical almanacs including Practical Navigation (1669) and A Pocket Book Containing Several Choice Collections in Arithmetic, Geometry, Surveying, Dialing, &c. (1677). (Inventory #: 123177)
$1,800.00 add to cart or Buy Direct from
Raptis Rare Books
Share this item