Original Carbon Typescript for Part I of "Howl" 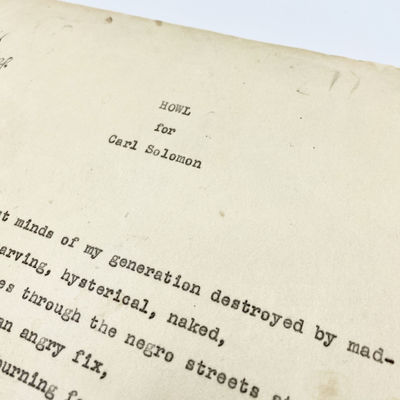 Previously unknown original carbon typescript of the most important postwar American poem: Allen Ginsberg's "Howl." Almost certainly the only surviving draft version of this iconic poem remaining in private hands, and the only one to ever be separately offered for sale. This copy was struck from what has become known as the fifth draft (so identified in HOWL: Original Draft Facsimiles and Variant Versions [etc.]. Barry Miles, Editor. New York: Harper & Row, 1986) and most likely dates from early 1956. It is this draft that Ginsberg read in what is the earliest known recording of the poem at Oregon's Reed College from February 1956 (indeed you can hear him turning the pages at precisely the right time on the recording), performed just three months after the legendary Six Gallery reading where the poem debuted. This copy of "Howl" was discovered among the papers of bohemian and arts benefactor Annie Ruff, and is the exact carbon struck on Ginsbergs own typewriter from the top ribbon copy now housed at Stanford among Ginsberg's papers. Ginsberg was known to have created carbons of the poem, and the peculiarities both of Ginsberg's typewriter and of this particular typing (i.e. matching orientations of the text vis-à-vis the page edges on the top copy vs. the carbon, parallel impressions evidencing matching strike timing and strength) - as well as revisions visible on both the top copy and this carbon - exactly match the original held at Stanford. It is not a fair copy, and we can also state definitively that it is not a later reproduction or duplication of any kind. The typescript here offered differs significantly from both the later published versions (ditto and City Lights), and perhaps more importantly from even the known top-copy draft at Stanford. Words erased and retyped in the top copy are visible in the carbon, as are other changes evidenced in comparison to the published and the digitized versions. As such, this typescript remains a rare window into Ginsberg's creative process, and an important document of this landmark poem. But perhaps most importantly, page seven is here in the carbon as it was originally typed, before Ginsberg retyped the entire page, changing it significantly. This original version is lacking from Ginsberg's papers and had previously only been known by the recently discovered February 1956 Reed College reading, the earliest known recording of the poem, which follows the text of the carbon here offered (indeed you can hear him turning the pages at precisely the right time on the recording), and was recorded just three months after the poems legendary debut at the Six Gallery reading. While the Six Gallery reading where "Howl" was debuted in an early form in October 1955, and the subsequent re-staging of this event in March of 1956 (the first time the poem was read in its entirety), made Ginsberg locally famous and even drew journalists like The New York Times's Richard Eberhart to document the nascent Beat Scene, no one was prepared for the effect the poem would have on both literature and the culture at large when it was published in the Fall of 1956 by Lawrence Ferlinghetti's City Lights Books. The book sold through its initial 1000-copy print run in just a few months, and a second printing of 1500 was ordered from the printer Villiers in London (who did handsome, inexpenive letterpress work). But when the books arrived in San Francisco from the UK, more than 500 copies were seized by US Customs authorities for obscenity, an event which (along with Ferlinghetti and City Lights employee Shig Murao's arrest later that year for selling HOWL), brought the poem - and its author - immediately to national attention, a position neither has relinquished. As the title of the 2006 book in honor of the poem's fiftieth anniversary described "Howl," it was without exaggeration "the poem that changed America." The City Lights edition has never been out of print, having sold upwards of a million copies, and the poem pioneered not only a more confessional mode of American poetry, but helped launch numerous youth movements from beatniks to hippies, Situationists to punks. The poem is a landmark in the history of gay rights, free speech, protest, censorship, and the counterculture. Only Eliot's "The Wasteland" rivals it in modern American poetry in terms of influence, legacy, and importance. Along with Kerouac's ON THE ROAD and Burrough's NAKED LUNCH, it is a cornerstone of the Beat movement and remains Ginsberg's most enduring work. A singular opportunity and monument of American literature. (Inventory #: 24356)
$425,000.00 add to cart or Buy Direct from
Brian Cassidy Bookseller @ TPM
Share this item

[Grindstone City, MI] : [The Alternative Press] , [1983]
(click for more details about REMEMBERED POEM)
View all from this seller>