HENRY HOBSON RICHARDSON AND HIS WORKS 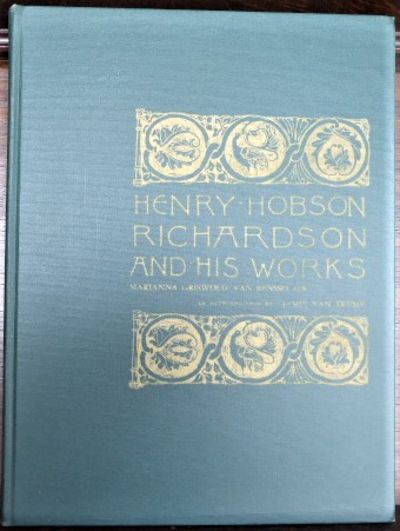 by VAN RENSSELAER, MRS. SCHUYLER.
Forest Park, Illinois: The Prairie School Press, 1967. A facsimile edition is this work first published in 1888. Some new material was added including an introduction by James D. Van Trump. Profusely illustrated throughout. A very crisp and clean copy. 152pp. Richardsdon (1838-1886) was a prominent American architect best known for his style of design that became known as Richardsonian Romanesque. He is one of the so-called "Trinity" of American architecture along with Frank Lloyd Wright, and Louis Sullivan.. Facsimile Edition. Green Cloth. Minor Edge Wear/Issued Without Duct Jacket. Large Quarto. (Inventory #: 014640)
$130.00 add to cart Available from Glenn Books
Share this item
Glenn Books
Offered by

HINTS ON HOUSEHOLD TASTE IN FURNITURE, UPHOLSTERY AND OTHER DETAILS

London : Longmans, Green and Company , 1868
(click for more details about HINTS ON HOUSEHOLD TASTE IN FURNITURE, UPHOLSTERY AND OTHER DETAILS)