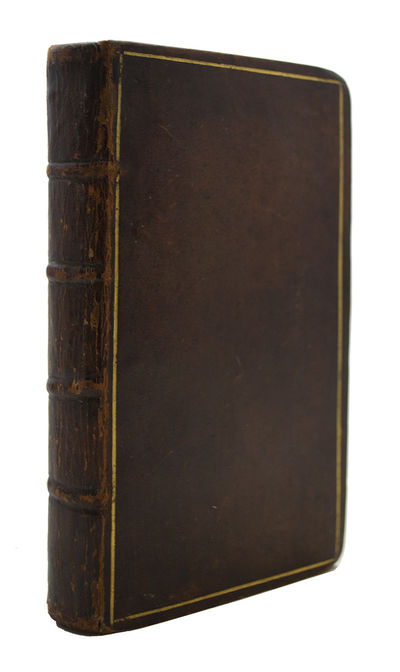 by ANCILLON, Charles
First English Edition of this Interesting Treatise [ANCILLON, Charles]. [SAMBER, Robert translator]. Eunuchism displayíd. Describing all the different sorts of Eunuchs; the esteem they have met with in the world, and how they came to be made so. Wherein principally is examiníd, whether they are capable of marriage, and if they ought to be sufferíd to enter into that state. The whole confirmíd by the authority of civil, canon, and common law, and illustrated with many remarkable cases by way of precedent. Also a comparison between Signior Nicolini and the three celebrated eunuchs now at Rome, viz. Pasqualini, Pauluccio, and Jeronimo (or Momo): with several observations on modern eunuchs. Occasioníd by a young ladyís falling in love with Nicolini, who sung in the Opera at the Hay-Market, and to whom she had like to have been married. Written by a person of honour. London: Printed for E. Curll at the Dial and Bible over against St. Dunstanís Church in Fleetstreet, 1718. First English edition. A translation by Robert Samber of the íTraitÈ des Eunuquesí of Charles Ancillon, writing under the pseudonym C. díOllincan first published in 1707. Twelve (6 5/16 x 3 5/8 inches; 160 x 93 mm). xxiv, 240, [10, publisherís advertisements] pp. With initial blank (leaf A1), not often found. Lacking final leaf of publisherís advertisement. Full contemporary calf, boards ruled in gilt. Calf on spine flaking and cracking, bit binding holds strong. Bottom of spine with some shelf wear. Some light dampstaining and toning. Signature L with some worming to top outer corner, affecting page numbers and occasionally a few letters of text. Overall a very good copy. This text is an interesting treatise on castrati, ìThe author is mostly concerned with the philosophical and practical problems associated with marriage. However, while Curll has decently concealed some of the more controversial details under the cloak of a learned tongue, there are fairly explicit accounts of, among other things, what amounted to an early form of vasectomy.î (Quaritch). ìIndeed, almost from their first known appearance in the West, these singers [castrati] elicited sexual anxiety...The best known expression of this sort of anxiety, however, comes in the 1707 TraitÈ des eunuques of lawyer and historian Charles Ancillon. Like earlier writings, this treatise makes the traditional argument that marriage is forbidden to eunuchs, by both civil and canon law, because such men cannot father children; indeed, the ostensible stimulus of the work was the desire of a certain woman to marry the castrato Niccolini (NicolÚ Grimaldi). But, as Beth Kowaleski-Wallace points out, Ancil- lonís language often suggests a motivation based not so much on piety or lawfulness as on an underlying fear of the castratoís sexuality.î(The Eroticism of Emasculation: Confronting the Baroque Body of the Castrato. Roger Freitas). ìEdmund Curll was a notorious figure among the publishers of the early eighteenth century: for his boldness, his lack of scruple, his publication of work without authors' consent, and his taste for erotic and scandalous publications.î (Edmund Curll, Bookseller Paul Baines and Pat Rogers) ìOne of Curll's more salacious titles was the anonymous volume Eunuchism Display'd (1718)óthough, like many of his similar books, the title suggests a more prurient book than the contents deliver. But in the Weekly Journal for 5 April 1718 Daniel Defoe attacked the book as a piece of pornography, coining a new term for the production of such books: curlicism. Curll, far from being offended, seemed to take some pride in the term, and he rapidly produced a pamphlet in his defence entitled Curlicism Display'd (May 1718), in the text of which he made enough references to his various titles that he could hope the reader's interest would be aroused.î (Oxford DNB). ESTC T75792. HBS 68472. $1,250 (Inventory #: 68472)
$1,250.00 add to cart Available from
Heritage Book Shop
Share this item