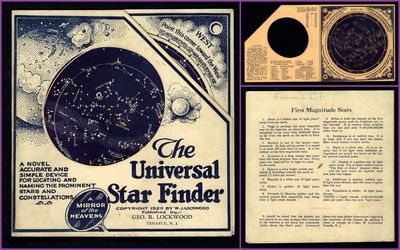 by W. J. Lockwood
Tenafly, NJ: Geo. R. Lockwood, 1929. General wear. Inscribed on back. . A novel, accurate, and simple device for locating and naming the prominent stars and constellations... A mirror of the Heavens." A die cut volvelle star chart that allows the user to correctly identify the stars in the northern sky. The volvelle is housed with in a folder with a die-cut circle in the cover exposing the star chat beneath. It is surrounded by illustrations of the night sky with the moon and other planets. The top left corner of the cover also has be purposely cutaway by the printer to reveal the edge of the volvelle and some illustrations of the moon over clouds, along with the world "West". The interior of the item contains instructions on how to use the star chart, and surrounding the volvelle itself are the cardinal directions of North, South, East, and West, so that one can correctly oriented themselves to use the chart. The back side has a list of fourteen "first magnitude stars", otherwise known as the brightest stars in the sky. "Emerson L. Frost", presumably the original owner of the star finder has been inscribed on the back. Volvelle within a single fold housing case. Measures 7" x 7" (case, folded), 14" x 7" (case, unfolded), 5 3/4" (diameter of volvelle). (Inventory #: 20200629)
$125.00 add to cart or Buy Direct from Eclectibles
Share this item