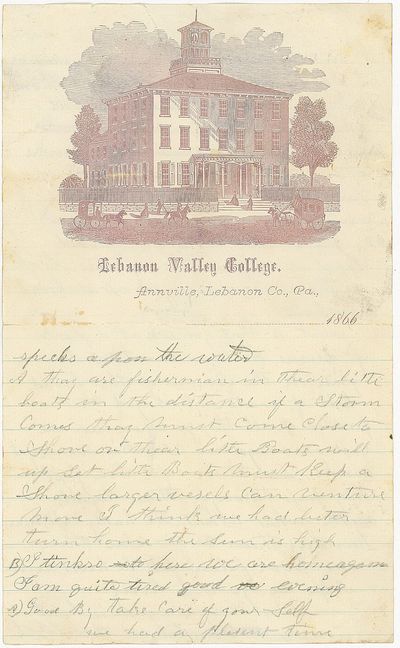 Annville, Labanon Co., PA, 1866. A 9" x 5 5/8" letter sheet with an illustration of the exterior of the college at top. Sheet dated 1866. Content includes random thoughts of writer, presumably used as a practice sheet.

Lebanon Valley College is a small, liberal arts higher education institution situated in the heart of Annville in Lebanon County, PA. Founded in 1866. The college charter, granted in 1867, specifically stated that Lebanon Valley College was established for the education of both sexes. Indeed, Lebanon Valley College can claim that it has been coeducational longer than any other college east of the Allegheny Mountains. However, the curricula were different for men and women, a condition created from a compromise after an uproar in the founding church over the equal treatment of men and women. The "Ladies Course" included modern languages, painting, drawing, wax flower and fruit making, and music. By 1878, the college catalog began announcing that experience showed that there was no difference between men and women in their ability to master college courses, an unpopular idea at its time. (Inventory #: 27003923)
$125.00 add to cart or Buy Direct from Eclectibles
Share this item