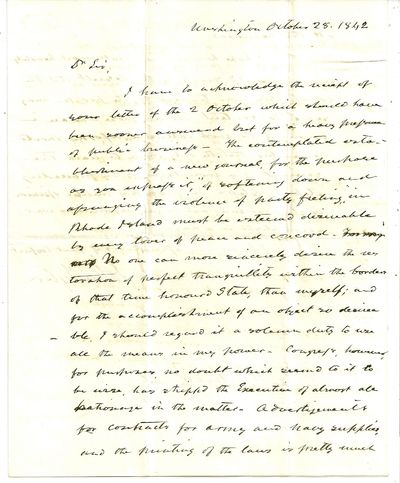 by TYLER, John
Washington DC, 28 October 1842. Letter. Normal folds from mailing, a few short splits, ink dark. Near Fine. A two-page AUTOGRAPH LETTER SIGNED as President on one integral 15-3/4" x 9-7/8" sheet of stationery folded to make four 7-7/8" x 9-7/8" pages. Addressed to Elisha R. Potter of Rhode Island with excellent content on the state's politics and the after effects of the Dorr Rebellion which sought to extend voting rights beyond land owners. In part: "The contemplated establishment of a new journal for the purpose as you express it, 'of softening down and assuaging the violence of party feeling' in Rhode Island must be esteemed desirable by every lover of peace and concord. No one can sincerely more desire the restoration of perfect tranquillity within the borders of that time honoured State, than myself; and for the accomplishment of an object so desirable, I should regard it a solemn duty to use all the means in my power. Congress, however, for purposes no doubt which seemed to it to be wise, has stripped the Executive of almost all patronage in the matter.... I hope however, and shall most heartily rejoice should such be the result, that the constitution now tendered to the people may serve to content them -- Those who are in favor of the most extensive reform should remember that the only mode to reach the summit of a mountain is by proceeding step by step -- The progress of public opinion is slow but sure, and no great reform was ever accomplished in a day." Tyler refers to the new state constitution of Rhode Island, which extended voting rights to any native born adult male, regardless of race, who could pay a poll tax of $1. The new constitution was ratified only a month earlier and did not take effect until the following year. Accompanied by an engraving of Tyler.

Elisha R. Potter, a delegate to the Rhode Island constitutional convention of 1841 to 1842, was elected in 1842 as a Law and Order Party candidate to the Twenty-eighth Congress. His notes and correspondence on the Dorr Rebellion and early 19th-century Rhode Island politics are held by the Rhode Island Historical Society. John Tyler, the tenth president, was the first vice president to succeed to the presidency without election, taking over for William Henry Harrison who died just one month after becoming president. Tyler was also the target of the first impeachment proceedings against a president though he was not impeached. Incredibly, Tyler still has one living grandson in 2021, another having died in 2020. (Inventory #: 020430)
$3,000.00 add to cart or Buy Direct from Charles Agvent
Share this item

THE ANATOMY OF MELANCHOLY. What It Is. With All The Kinds Causes, Symptomes, Prognostickes, and Severall Cures of It. In Three Partitions, with Their Severall Sections, Members and Subsections. Philosophically, Medicinally, Historically Opened & Cut Up

London : Henry Cripps , 1628
(click for more details about THE ANATOMY OF MELANCHOLY. What It Is. With All The Kinds Causes, Symptomes, Prognostickes, and Severall Cures of It. In Three Partitions, with Their Severall Sections, Members and Subsections. Philosophically, Medicinally, Historically Opened & Cut Up)
View all from this seller>