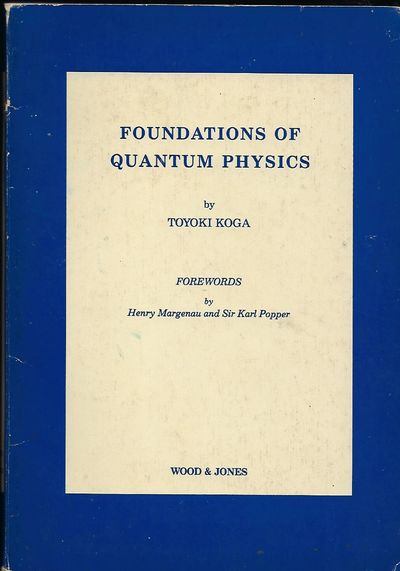 by KOGA, Toyoki
[Pasadena, Ca.]: Wood & Jones, 1980. First Edition. Signed presentation from Koga on half-title page: "For Professor George E. Uhlenbeck, With my best compliments, Toyoki Koga." Toyoki Koga was a prominent physicist who was behind the turbulent changes in attitudes to quantum theory in the second half of the 20th century. George Eugene Uhlenbeck was a Dutch-American theoretical physicist, who developed the physical theory of the Ornstein-Uhlenbeck process. n 1927, Uhlenbeck took a position as an instructor in physics at the University of Michigan in Ann Arbor. He stayed there until 1935, when he succeeded H. A. Kramers as a professor of theoretical physics in Utrecht. During his eight years in Ann Arbor, Uhlenbeck organized the noted "Summerschool" in theoretical physics. A scarce book, this copy, particularly, notable for the association between two major physicists of the day. Small quarto: blue & white printed wraps; 194 pages. Forewords by Henry Margenau and Sir Karl Popper.. Very Good (little edgewear covers; contents clean & tight). (Inventory #: 57406)
$150.00 add to cart or Buy Direct from Antic Hay Books
Share this item
Antic Hay Books
Offered by