BOOTED THRU BOOT CAMP: A Collection Of Verse From The Experience Of A Boot In Boot Camp AND TRANSFER UNIT.. 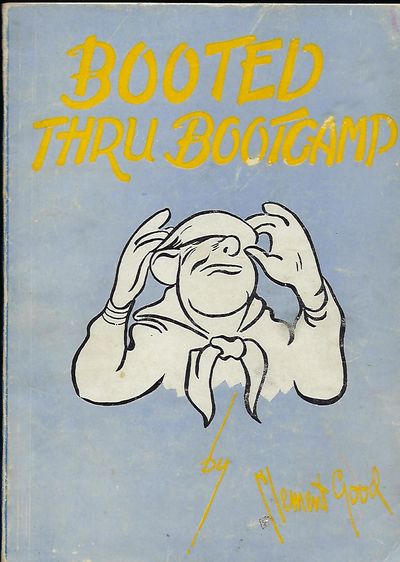 by GOOD, Clement. [Butler Sterling HARKINS]
Hollywood: Murray & Gee, Inc., 1944. First Edition. Signed presentation from Good [Harkins] on the dedication page: "Elmer C. Pearson. Here's To The Eagle! Clement Good. 1st Edition." A scarce war-time poetry book. Clement Good is actually Butler Sterling Harkins [1910-2009]. He received his master's degree in education from the University of Southern California and began his 50-year teaching career in Oxnard. He was a school principal when World War II broke out, at which time he joined the Navy and served in the South Solomon Islands and Guadalcanal. While in the Navy, he published this book "Booted Thru Boot Camp," poems of humor and pathos, illustrated by one of the Walt Disney artists. When he retired from the service, he opened Oxnard's first bookstore, The Book Haven, and resumed teaching at Oxnard High School District. Small 8vo., pictorial light-blue wraps; 94 pages. Illustrated by Walken.. Very Good (little wear covers with indented dimples on covers & bit of text). Scarce! (Inventory #: 57407)
$85.00 add to cart or Buy Direct from Antic Hay Books
Share this item
Antic Hay Books
Offered by