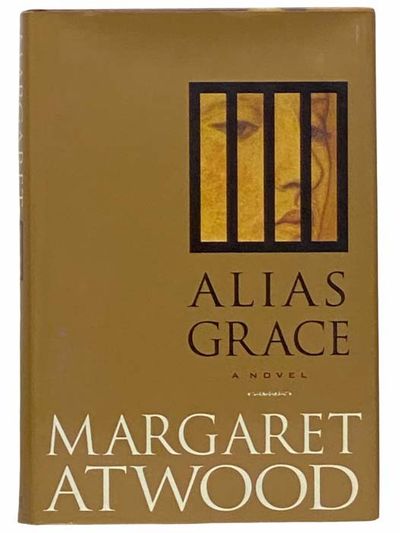 by Atwood, Margaret
New York: Nan A. Talese / Doubleday, 1996. First American Edition. Hard Cover. Near Fine/Near Fine. First American edition. 1996 Hard Cover. We have more books available by this author!. 468 pp. 8vo. Inspiration for the CBC miniseries. "In Alias Grace, bestselling author Margaret Atwood has written her most captivating, disturbing, and ultimately satisfying work since The Handmaid's Tale. She takes us back in time and into the life of one of the most enigmatic and notorious women of the nineteenth century. Grace Marks has been convicted for her involvement in the vicious murders of her employer, Thomas Kinnear, and Nancy Montgomery, his housekeeper and mistress. Some believe Grace is innocent; others think her evil or insane. Now serving a life sentence, Grace claims to have no memory of the murders. Dr. Simon Jordan, an up-and-coming expert in the burgeoning field of mental illness, is engaged by a group of reformers and spiritualists who seek a pardon for Grace. He listens to her story while bringing her closer and closer to the day she cannot remember. What will he find in attempting to unlock her memories? Is Grace a female fiend? A bloodthirsty femme fatale? Or is she the victim of circumstances?" "Intrigued by contemporary reports of a sensational murder trial in 1843 Canada, Atwood has drawn a compelling portrait of what might have been. Her protagonist, the real life Grace Marks, is an enigma. Convicted at age 16 of the murder of her employer, Thomas Kinnear, and his housekeeper and lover, Nancy Montgomery, Grace escaped the gallows when her sentence was commuted to life in prison, but she also spent some years in an insane asylum after an emotional breakdown. Because she gave three different accounts of the killings, and because she was accused of being the sole perpetrator by the man who was hanged for the crime, Grace's life and mind are fertile territory for Atwood. Adapting her style to the period she describes, she has written a typical Victorian novel, leisurely in exposition, copiously detailed and crowded with subtly drawn characters who speak the embroidered, pietistic language of the time. She has created a probing psychological portrait of a working-class woman victimized by society because of her poverty, and victimized again by the judicial and prison systems. The narrative gains texture and tension from the dynamic between Grace and an interlocutor, earnest young bachelor Dr. Simon Jordan, who is investigating the causes of lunacy with plans to establish his own, more enlightened institution. Jordan is hoping to awaken Grace's suppressed memories of the day of the murder, but Grace, though uneducated, is far wilier than Jordan, whom she tells only what she wishes to confess. He, on the other hand, is handicapped by his compassion, which makes him the victim of the wiles of other women, too? His passionate, desperate landlady, and the virginal but predatory daughter of the prison governor. These encounters give Atwood the chance to describe the war between the sexes with her usual wit. Although the narrative holds several big surprises, the central question (Was Grace dupe and victim or seductress and instigator of the bloody crime?) is left tantalizingly ambiguous." -- Publishers Weekly CONTENTS: Jagged Edge; Rocky Road; Puss in the Corner; Young Man's Fancy; Broken Dishes; Secret Drawer; Snake Fence; Fox and Geese; Hearts and Gizzards; Lady of the Lake; Falling Timbers; Solomon's Temple; Pandora's Box; The Letter X; The Tree of Paradise. (Inventory #: 2310398)
$15.00 add to cart or Buy Direct from
Yesterday's Muse
Share this item
Yesterday's Muse, Inc.
Offered by