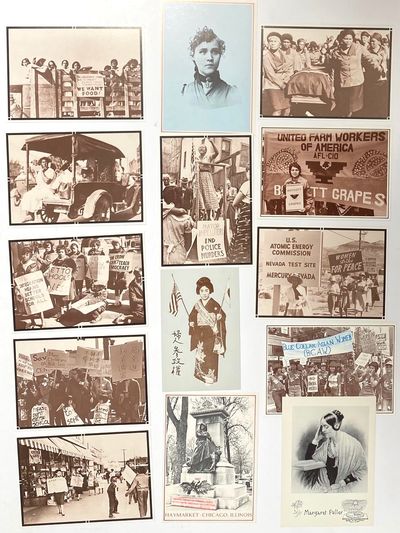 Martinsville, IN: Helaine Victoria Press, 1989. Group of 14 photographic postcards of activists and cultural figures, each with a black and white or sepiatone photo of the relevant figure or social movement on one side and a substantial biographical paragraph on the other side. Includes Dolores Huerta, Kimura Komako, Margaret Fuller, Voltarine de Cleyre, Women Strike for Peace, Blue Collar Asian Women, and more. Helaine Victoria Press, which took its name from the middle names of founders Jocelyn Helaine Cohen and Nancy Taylor Victoria Poore, published broadsides, posters, and other formats of work, but was best known for its women's history postcard series. It started with an offset press in Santa Monica but switched to an 80-year old cast iron letterpress, noted by Cohen as "the method which was standard when we were trying to get the vote." The press later moved to Indiana, and was ultimately donated to the Women's Rights National Historical Park in Seneca Falls, New York, where the letterpress now resides. (Inventory #: 262461)
$20.00 add to cart or Buy Direct from Bolerium Books
Share this item