Map of the United States with the contiguous British and Spanish Possessions Compiled from the latest and best authorities by John Melish engraved by J. Vallance & H. S. Tanner 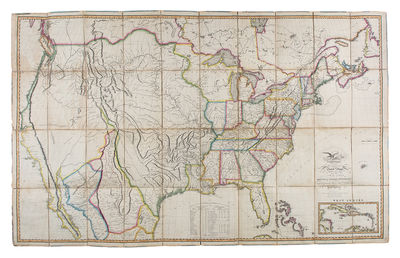 by MELISH, John (1771-1822)
Philadelphia, 1818. Engraved map, with full period hand colouring, dissected into 40 sections and linen backed (as issued). Inset of the West Indies, statistical table. Repairs to separations at folds. Housed in a modern full blue morocco box. The first large-scale map of the United States: this very rare issue of great significance to the mapping of the West, being the edition used to determine the boundary between the U.S. and Mexico in the 1819 Adams-Onis treaty.

A map of inestimable importance - one which synthesized the best data available at the crucial moment of the opening of American West, and one which, in a sense, envisioned and enabled the Manifest Destiny of the United States. "The cartographic publication that best publicized for the American people the data derived from the Lewis and Clark Expedition and Zebulon Pike's exploration of the southwest in 1806 and 1807 was John Melish's 1816 Map of the United States" (Ristow). Also, much like the Mitchell map of the previous century, the Melish became the map of record in many important treaties between the United States and Spain, Mexico, and both the Republic and State of Texas. Specifically, the United States-Mexico boundary was laid out on a copy of the map according to the Adams-Onis Treaty signed in February 22, 1819. The map also played a key role in the development of American mapmaking. "An exquisite map, it distinguished Melish as the leading American map publisher of the second decade and placed American maps on equal footing with those produced by the prestigious firms in London and Paris" (Schwartz). In fact, Melish founded the first company in the United States to deal specifically in maps and geographical works. The map was engraved by arguably the two finest map engravers in the United States at the time: John Vallance and Henry S. Tanner. It set a new standard for clarity and precision in map production. The present example is the second issue of the 1818 edition, as identified by Ristow (in A la Carte pp.162-182, the most complete account of the map). The 1818 edition is of particular importance, as it is "the 1818 edition that was consulted by the official arbiters in laying down the boundary between the United States and the Spanish possessions in 1819" (Ristow). Martin and Martin write: "Recognizing that the demand for geographical information on the American west was limitless in the foreseeable future, Melish undertook to accumulate a vast amount of descriptions, statistics and maps and in 1816 produced in six sheets his famous map ... For the Texas area, Melish relied heavily on the surveys conducted by William Darby, who had personally surveyed much of the Sabine River area ... Melish's maps significantly improved the descriptions and depictions of the Texas interior, but perhaps its most lasting value to history was its official association with the Adams-Onis Treaty, because Melish's 90th meridian, today the eastern boundary of the Texas Panhandle, was off by approximately ninety miles, controversy and court litigation concerning the correct boundary lasted well beyond Texas's annexation ... Of lasting value, too, was the widespread dissemination of new information concerning Texas geography only five years before Stephen F. Austin decided to honor his father's contract with the Mexican government to bring Anglo-American settlers to inhabit this rich new land" (Martin & Martin). There are two primary reasons for the great rarity of this map: firstly, Melish only printed 100 copies of each issue to allow him to constantly update the map with the latest geographical information; the second reason is its large size which has ensured a high attrition rate over the past two centuries. Melish's map, the first on a large scale to show the area of the present United States from coast to coast, provided most Americans with their first clear-sighted view of the continental landmass of which the United States was a part. Thomas Jefferson, said of the map that it provides a "luminous view of the comparative possessions of different powers in our America."