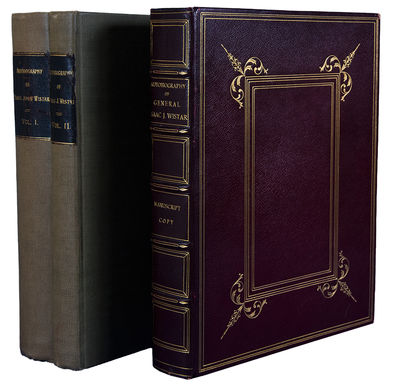 Born in 1827 in Philadelphia, Isaac Jones Wistar was a lawyer who served as a Colonel in the Union Army during the Civil War, fighting in the Battle of Antietam and Battle of Ball's Bluff. Upon returning from the war, he resumed his practice in Philadelphia and served as the vice president of the Pennsylvania Railroad Company. His "Autobiography" contains a long account of his life, including the years when he moved to California to mine gold and practice law between 1849 and the outbreak of the Civil War. The first volume discusses at length the settlement of the Western frontier from 1849 to 1860, including his experiences in Oregon, hunting, and with Native Americans, and the second volume discusses his experiences during the Civil War. The present copy is numbered 9 of 250 copies with an additional printed tipped-in slip that states: "The recipient of this book is requested to regard its contents, for the present, as confidential." "Largely devoted to the opening and development of the far West from 1849 to 1860, in which Wistar played a conspicuous part before achieving fame and fortune in Pennsylvania" (Howes). [TOGETHER WITH]: Autobiography of General Isaac Wistar [Typed Manuscript]. Philadelphia, 1892. 4to (11 x 8 3/8 inches). 689 typed pages. 2 manuscript letters mounted to preliminary pages and 1 manuscript note. Contemporary full red morocco gilt, spine in six compartments with raised bands, lettered in the second and fourth. Along with the main work is a typed manuscript of Wistar's "Autobiography," beautifully bound in contemporary red morocco and decorated in gilt. It contains the same text as the published version except for the chapter titles, which may have been added later. A manuscript note at the beginning of the book reads: "These pages were typewritten from the original manuscript loaned to me by General Isaac J. Wistar for the purpose; in order that I might possess during his lifetime the 'Autobiography' which he directed should not be published until the period specified by him should have elapsed after his death. Mr. William D. Winsor has a similar type-written copy; he and I having shared in the cost of making them. Effingham B. Morris." Effingham Buckley Morris was born in Philadelphia in 1856, the son of Israel Wistar Morris and Annis Morris Buckley, members of Philadelphia's oldest and most influential families. He attended the University of Pennsylvania and had a successful career as a financier, working for companies like the Philadelphia National Bank, Franklin National Bank, Commercial Trust Company, the Pennsylvania-Maryland Coal Co. and more.