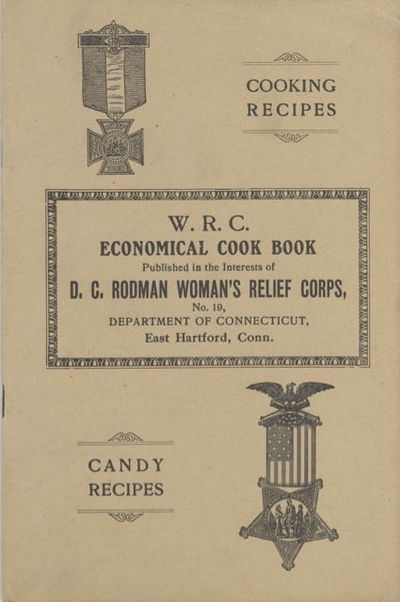 by [Woman's Relief Corps; D. C. Rodman Post, No. 19 (East Hartford, Conn.)]
East Hartford, Conn: [The Corps], 1920. Octavo-sized booklet (21.25 x 14 cm.), 28 pages. Advertisements. Title and author from cover. Date of publication determined from external evidence. Evident FIRST EDITION. A charitable cookbook produced as a contract publication, with nearly one hundred unattributed recipes. Includes entries for Split Pea Soup, Creamed Codfish, Sour Milk Ginger Bread, Graham Drop Cookies, Banana Salad, Maple Taffy, Cocoanut Creams (with cochineal syrup). ~ The Woman's Relief Corps was one of several service groups ancillary to the Grand Army of the Republic, a veterans' organization founded to perpetuate the memory of the Union Army. The G. A. R. and its auxiliaries were organized in quasi-military arrangements and divided into posts. Primary concerns were the establishment of soldiers' homes, the provision and maintenance of soldiers' graves, and advocacy for pension benefits. But their influence was wide and varied; they played a role, for instance, in establishing Memorial Day as a national holiday. In 1949, their core membership dwindling, the veterans held a final meeting (or "encampment") in Indianapolis and voted to dissolve after the last of their members died. The organization ceased to exist in 1956. After dissolution, in 1962, the Woman's Relief Corps reconstituted as a distinct corporate entity in order to continue its advocacy and charitable work. ~ The East Hartford unit of the Department of Connecticut takes its name from a Civil War veteran, Daniel Clarke Rodman (1826-1881), who had served as Lieutenant Colonel of the Second Brigade, Seventh Connecticut Infantry, and was brevetted Brigadier General after the War on account of his valor during a celebrated assault - dubbed "forlorn hope" - on Fort Wagner in South Carolina. ~ The framing dates of publication are proposed on grounds that The Manternach Company, advertised on page 10, was incorporated in 1914, and that The Hubert Fischer Brewery advertised on page 8 closed its doors in 1920. ~ Clean and bright. In publisher's stapled brown wrappers, lettered in black. Small bump to upper right coner of wrapper, otherwise fine. Unrecorded. [OCLC locates no copies; not in Cook, Brown or Cagle]. (Inventory #: 5723)
$200.00 add to cart or Buy Direct from
Rabelais: Thought for Food
Share this item