Cook Book. Prepared by the Ladies of The Congregational Church, Morris, Connecticut 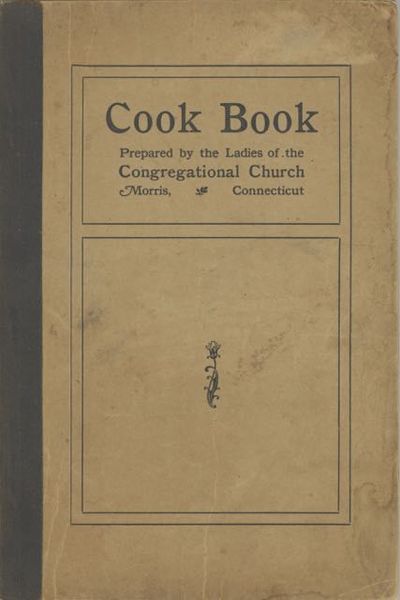 by [Congregational Church (Morris, Conn.). Ladies of the Church]
Waterbury, Connecticut: The Mattatuck Press, Incorporated, 1913. Octavo (22.75 x 15.5 cm.), 82 pages. Advertisements. Evident FIRST EDITION. Eight variations on Sponge Cake, eight sorts of Cruller, and similar multiples from Oatmeal Bread to Apple Sauce Cake: a church cookbook with approximately three hundred thirty attributed recipes, weighted to custards, puddings, frostings, fillings, floats, whips, and mousses - none of which, of course, include final baking details. Which is not to say that all entries are simply commonplace. Mother's Dried Apple Cake, for instance: "Three cups of dried apples soaked overnight in a little water, chopped fine. Stew two hours in two cups molasses. When cool, add one egg, two-thirds cup milk, two-thirds cup shortening, one cup sugar, one tablespoonful each of cloves and cinnamon, one nutmeg, one cup raisins, one tablespoonful soda. Stir in flour till quite thick. Makes two loaves." ~ Morris, known at first to history as South Farms, lies just south of Litchfield County's center. Its Congregational Church originated as a descendent of the Litchfield Congregationalists, finally dedicating its own meeting-house in 1764 "opposite the blacksmith's shop at the [town] centre" (according to an anonymous account, History of Litchfield County, published in Philadelphia in 1881). A newer and more robust building was situated on the green by the time South Farms incorporated as Morris in 1859. (The new name honored First Lieutenant (later Captain) James Morris, originally of Litchfield South Farms, who had marched with George Washington to Philadelphia in October 1776 and, moreover-after years as a prisoner of war-commanded troops during the decisive Seige of Yorktown.) ~ Internally a bit age-toned, a few with minor creases, but unmarked, firm, and clean. Stapled in tan wrappers, now a bit faded and lightly stained, with a simple, forthright design and black titling; black cloth-backed spine; corners slightly bumped. Unrecorded. [OCLC locates no copies; not in Cook, Brown, or Cagle]. (Inventory #: 5212)
$250.00 add to cart or Buy Direct from
Rabelais: Thought for Food
Share this item