Photographs. Set of four press photographs announcing Hemingway was very much alive after a plane crash in Africa, January 1954 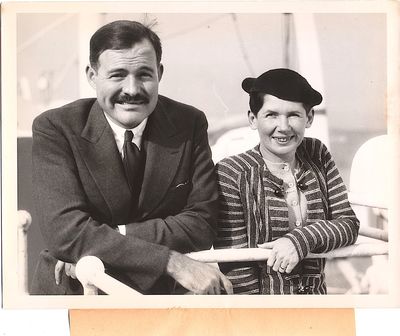 by HEMINGWAY, ERNEST
Hemingway survived two plane crashes in Africa in January 1954. He and his wife, Mary Welsh, essentially unhurt from the first crash and picked up by a sightseeing boat, went down a second time when their rescue plane crashed and burned. Several newspapers reported the Hemingways dead, but this false story was soon corrected. Newspapers printed the good news that the internationally renown writer was alive with images of a robust and smiling Hemingway. We offer four of these press photos, each with a description attached on aging paper and stamped on verso by the news service. Each is 7"x 9", curled at the edges but otherwise in very good condition. The descriptions attached at the lower edge of each photo are on browned paper, brittle at the lower edge where the page remains partially attached to the photograph. The photographs briefly described:
[Image 1] Hemingway and Pauline Pfeiffer (second wife) in Kenya, International News Photos 1934.
[Image 2] Hemingway and Martha Gellhorn (third wife) on safari in Africa, International News Photos, 1940.
[ Images 3 and 4] Hemingway with American bull fighter, Sidney Franklin, Kenya, International News Photos,1937.
[Image 5] Hemingway and Mary Welsh, his wife at the time of the plane crash, "as they arrived in New York in 1950 aboard the Ile de France." Associated Press.
Note on images: The typed descriptions attached to each photo and verso press service stamp are similar to the photo of Hemingway with Sidney Franklin. (Inventory #: 4779)
$1,300.00 add to cart or Buy Direct from
Schulson Autographs
Share this item

Donald Duck yells at Dennis the Menace in this Original Sketch Signed, 4to, Jan. 25, 1991


(click for more details about Donald Duck yells at Dennis the Menace in this Original Sketch Signed, 4to, Jan. 25, 1991)