[ANNOTATED VERNACULAR PHOTOGRAPH ALBUM COMPILED BY CHARLES KENNETH LAWYER, AN AMERICAN TEACHER LIVING IN JAPAN AT THE TIME OF THE GREAT KANTO EARTHQUAKE, PROVIDING A UNIQUE RECORD OF JAPANESE EDUCATION, FARMING, AND THE AFTER-EFFECTS OF THE EARTHQUAKE] 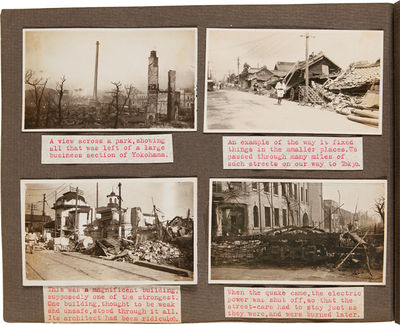 1925 · Himeji and other locations in Japan

by [Japanese Photographica]: [Lawyer, Charles Kenneth]
Himeji and other locations in Japan, 1925. Approximately 150 original vernacular photographs, ranging in size from 4 x 6 inches to 1 x 1 1/4 inches, plus several pre- printed postcards, all mounted to album leaves, all with detailed typed captions in red below the images, and with one typed letter laid in. Oblong quarto. Contemporary tooled black leather, string tied. Moderate rubbing, edges and spine a bit scuffed, corners worn. Minimal chipping to a couple leaves, a couple of captions torn, but mostly clean internally, with clean images. Very good overall. A lovingly-constructed photo-illustrated memoir compiled by Charles Kenneth Lawyer during his time teaching at the Himeji Middle School near Osaka in the early 1920s. The combination of the photographs and Lawyer's rich and often detailed captions combine for an impressive record of one American's view of Japan during the time just before and after the Great Kanto Earthquake of September, 1923. The photographs show Lawyer with friends, fellow teachers, and students, both American and Japanese people in both western and Japanese clothing. There are two self- portraits of Lawyer in hiyori geta sandals, tabi socks, a casual yukata robe, and carrying a bull's-eye janomegasa umbrella over his shoulder, one of which is captioned, "Quite a Jap." There are also images of Lawyer's house, the landlord's son, the housekeeper, Lawyer's students ("One of my best students, and the president of 'The Sunshine Club,' Mr. Hojo Kejiro"), his classroom, and numerous religious processions and festivals featuring priests, temples, temple musicians, shrines, and pilgrims. One image shows four American women, each identified in the photographs, with Lawyer's caption reading, "The Ladies of the Hinomoto Baptist Girls' School in Himeji. These kind ladies made life much more pleasant for me." Community scenes show dog carts, noodles stands, "an old vegetable peddler," men hauling wagons, vat making, fish vendors, people laundering kimonos, making noodles, Japanese Boy Scouts, movie theaters, shoemakers, and so forth. Rural settings include rice, hay, and bamboo farming with images of plowing, planting, irrigation, transplanting, threshing, flailing, harvesting, cutting, and more. There are also a number of tourist scenes, naturally, featuring Mount Fuji, plus some travel by boat and train. Lawyer also occasionally includes longer captions about certain Japanese locations, such as Himeji, Kyushu, Mega, and Ise. Fifteen of Lawyer's most important photographs and captions relate to the damage and destruction caused by the Great Kanto Earthquake, including the shell of the Grand Hotel in Yokohama. There are also pictures of leveled business and residential areas, a landslide, burned streetcars, streets flooded by damaged oil tanks, a stream of refugees carrying all they can upon their backs, an improvised refugee camp in a park, and an area of rubble captioned, "There were so many dead, and so many things to do, that it was impossible to care for all of them properly." Another image of a man walking with a woman with a heavily-bandaged head reads, "A common sight. Hundreds were blinded and injured, and had to be helped on, or abandoned to a terrible death." The typed letter laid into the album comes from the Earthquake Relief Fund and originally transmitted a check for 500 yen to Lawyer and the Himeji Middle School, to compensate the school for damages incurred during the earthquake. Charles Kenneth Lawyer graduated from Knox College with a degree in Education and his teaching position in Himeji seems to have been his first after college. Lawyer's opening caption in the present album relates his voyage to Japan and back. He writes that he left Vancouver, British Columbia on August 9, 1923 and arrived in Yokohama on August 20. He "experienced the great earthquake of September 1, 1923, being near Tokyo." He then started teaching in Himeji two weeks later. During his time in Japan, Lawyer took short trips - to Korea and China. He left Japan on May 16, 1925. Lawyer then obtained a masters degree from Northwestern University, and then a doctorate, thereafter working as a professor at San Diego State University, where he taught business management. An informative combination of personal memoir, travelogue, and photo-illustrated document capturing an American teacher's experiences in Japan during the time of the Great Kanto Earthquake. (Inventory #: WRCAM56466)
$2,000.00 add to cart or Buy Direct from
William Reese Co. - Americana
Share this item

THE PLYMOUTH SCOUT; OR, EUTAWAN, THE SLAYER

New York : Beadle and Company , 1871
(click for more details about THE PLYMOUTH SCOUT; OR, EUTAWAN, THE SLAYER)
View all from this seller>