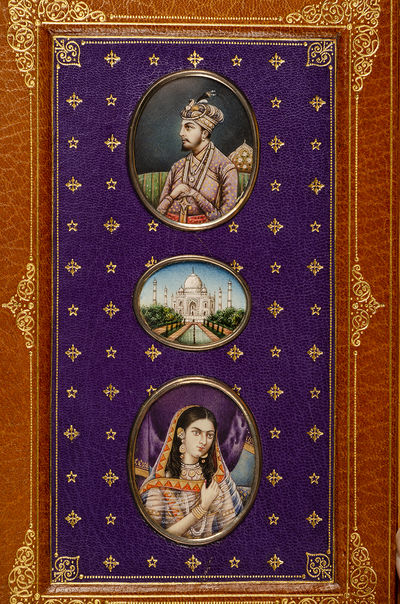 From the library of Ohio book collector B. C. Hoffman, with his initials in gilt at foot of spine.

Written for British citizens who "want more than a mere narrative of travel" but "something less than the studies of specialists," Lord Ronaldshay's India, A Birds-Eye View is "a mosaic of diverse pieces-a composition of historical, pictorial, statistical, and ethnographical vignettes." The Earl of Ronaldshay served British colonial interests in India for more than twenty years, notably as Governor of Bengal and Secretary of State for India. Photographic plates help readers familiarize themselves with visual representations of Indian culture, especially its geography and architecture; the Earl took and selected the photographs himself. Ronaldshay's goal is to "construct a mosaic which will present to the man who wishes to know something of this huge and varied land, whose recent history has been bound up so intimately with his own, an intelligible conspectus." (Preface). (Inventory #: 05061)
$9,500.00 add to cart or Buy Direct from
David Brass Rare Books
Share this item

London: Printed for J. Brindley, 1751
(click for more details about Faerie Queene, The. With an exact Collation of the Two Original Editions, Published by Himself at London in Quarto; the Former containing the first Three Books printed in 1590, and the Latter the Six Books in 1596)

Coral Island, The: A Tale of the Pacific Ocean..

London: T. Nelson and Sons, 1858
(click for more details about Coral Island, The: A Tale of the Pacific Ocean..)
View all from this seller>