Won By The Sword: A Tale of The Thirty Years’ War. 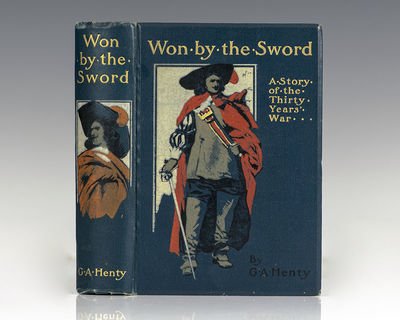 by Henty, George Alfred [G.A.]
London: Blackie & Son, Limited, 1900. First edition of Henty's classic historical tale. Octavo, original publisher's decorated cloth with gilt titles to the spine and front panel, with twelve illustrations by Charles M. Sheldon and four plans. In near fine condition. Ownership inscription and stamps. Prolific English novelist and war correspondent George Alfred Henty is best known for his historical adventure stories that were very popular and commercially successful in the late 19th century. Henty wrote 122 works of historical fiction throughout his career, including The Dragon & The Raven (1886), For The Temple (1888), Under Drake's Flag (1883) and In Freedom's Cause (1885) and was considered the most popular boy's author of his day. His publisher, Blackie and Son, estimated in February 1952 that they were producing nearly 150,000 Henty books a year at the height of his popularity, and stated that their records showed they had produced over three and a half million Henty books to date (Feather, The Age of the Novel, 2006). (Inventory #: 123091)
$100.00 add to cart or Buy Direct from
Raptis Rare Books
Share this item