The Complete 1922 Seven Pillars of Wisdom. 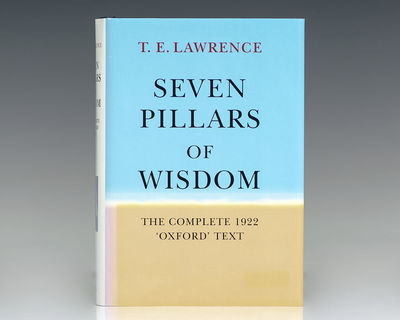 by Lawrence, T.E
Fordingbridge: J. and N. Wilson, 2004. First trade edition of the 'Oxford' Seven Pillars, being a third longer than the abridged first edition. Octavo, original cloth, cartographic endpapers, illustrated. Fine in a fine dust jacket. Jacket design by Mick Keats. Arab portraits by Eric Kennington. Seven Pillars of Wisdom is a biographical account of T.E. Lawrence's experiences during the Arab Revolt of 1916-18, when he was based in Wadi Rum (now a part of Jordan) as a member of the British Forces of North Africa. With the support of Emir Faisal and his tribesmen, he helped organize and carry out attacks on the Ottoman forces from Aqaba in the south to Damascus in the north. (Inventory #: 123808)
$300.00 add to cart or Buy Direct from
Raptis Rare Books
Share this item