Sea of Cortez: A Leisurely Journal of Travel and Research. 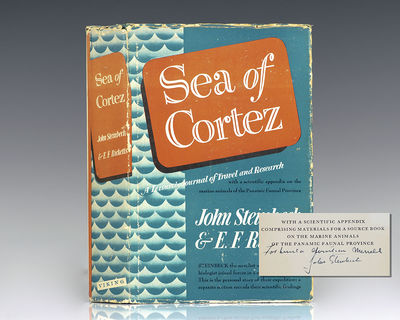 by Steinbeck, John and E. F. Ricketts
New York: The Viking Press, 1941. First edition of this classic work. Octavo, original cloth, cartographic endpapers. Presentation copy, inscribed by John Steinbeck on the title page. Some offsetting to the half-title page, near fine in a very good dust jacket. Jacket design by W.V. Eckhardt. The collaboration of two friends--one a novelist, one a marine biologist--produced a volume in which fascinating popular science is woven into a narrative of man's dreams, his ideals, and his accomplishments through the centuries. Sea of Cortez is one of those rare books that are all things to all readers. Actually the record of a brief collecting expedition in the lonely Gulf of California, it will be science to the scientist, philosophy to the philosopher, and to the average man an adventure in living and thinking. The teeming and wildly competitive world of the sand flats is seen in terms of history, politics, ethics, and sociology; a starfish is important, not only because it is a new variety, but because it is essential to the delicate balance of the whole region in which it is found. Steinbeck and Ricketts are the opposite of "pure" scientists: it is not only their work that fascinates them, but the complicated and enormously exciting implications of that work. (Inventory #: 123887)
$5,000.00 add to cart or Buy Direct from
Raptis Rare Books
Share this item