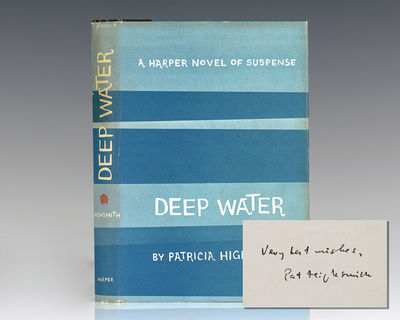 by Highsmith, Patricia
New York: Harper & Brothers, 1957. First edition of the author's classic fifth novel. Octavo, original half cloth. Signed by the author on the front free endpaper, "Very best wishes, Pat Highsmith." Near fine in a very good dust jacket. Jacket design by Polly Cameron. Rare and desirable signed. Anthony Boucher reviewing the novel in The New York Times, praised Highsmith's "coming of age as a novelist", and noted that Deep Water was "incomparably stronger in subtlety and depth of characterization" than her first novel, Strangers on a Train. Gillian Flynn has called the novel one of her favorites. In an interview with The Wall Street Journal, Flynn stated: "About ten or fifteen years ago, I came across it in a used-book store. I remember thinking, "Why has no one told me about it?" People know her for Ripley or Strangers on a Train but don't know a lot of her other stuff. And, it being a marital thriller where all the phobias and fears and darkness are based mostly inside a couple's home, that has always interested me, that in-your-face warfare between a husband and wife." It is the basis for the 1981 film by director Michel Deville into the film Eaux profondes, relocating the setting to France. Jean-Louis Trintignant starred as Vic, with Isabelle Huppert as Melinda, renamed Melanie and the 2022 film directed by Adrian Lyne starring Ben Affleck and Ana de Armas. (Inventory #: 123562)
$4,800.00 add to cart or Buy Direct from
Raptis Rare Books
Share this item