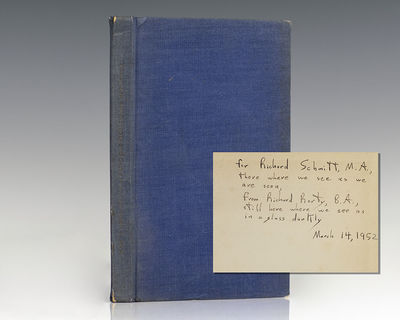 by Heidegger, Martin. [Rorty, Richard]
Frankfurt: Vittorio Klostermann, 1951. Second edition of Heidegger's work on Kant. Octavo, original cloth. Association copy, inscribed by American philosopher Richard Rorty to his life-long friend, "for Richard Schmitt, M.A., there where we see as we are seen, from Richard Rorty, B.A., still have where we see as in a glass darkly. March 14, 1952." The recipient, Richard Schmitt, was a life-long friend of Rorty's, both attended the University of Chicago before pursuing doctorate studies together at Yale University. Schmitt published "Martin Heidegger on Being" in 1969. Rorty inscribed the present volume the same year he began his post-doctoral studies at Yale. Heidegger's influence on Rorty's philosophy and subsequent rejection thereof is well documented. In very good condition. A unique association. Educated at the University of Chicago and Yale University, American philosopher Richard Rorty had strong interests and training in both the history of philosophy and contemporary analytic philosophy, the latter of which came to constitute the main focus of his work at Princeton University in the 1960s. He subsequently came to reject the tradition of philosophy according to which knowledge involves correct representation (a "mirror of nature") of a world whose existence remains wholly independent of that representation. From the late 1980s through the 1990s, Rorty focused on the continental philosophical tradition, examining the works of Friederich Nietzsche, Martin Heidegger, Michel Foucault, Jean-Francois Lyotard and Jacques Derrida. His work from this period included: Contingency, Irony, and Solidarity (1989); Essays on Heidegger and Others: Philosophical Papers (1991); and Truth and Progress: Philosophical Papers (1998). (Inventory #: 123076)
$1,250.00 add to cart or Buy Direct from
Raptis Rare Books
Share this item