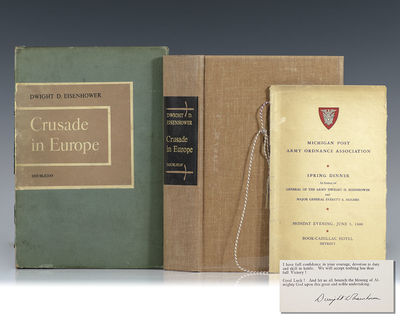 by Eisenhower, Dwight D
Garden City, NY: Doubleday & Company, 1948. Signed limited first edition of General Eisenhower's wartime memoirs. Thick octavo, original cloth, cartographic endpapers, top edge gilt, original acetate. One of 1426 numbered copies signed by Dwight D. Eisenhower, this is number 836. With a rare original dinner program from the Michigan Post Army Ordinance Association Spring Dinner held in honor of Eisenhower and Major General Everett S. Hughes held on June 3, 1946 at the Book-Cadillac Hotel in Detroit laid in. Both Eisenhower and Hughes spoke at the dinner and the program includes brief biographies of both Army Generals. Fine in the original acetate jacket and in the original slipcase which is in very good condition. A nice example with noted provenance. Five-star General Dwight D. Eisenhower was arguably the single most important military figure of World War II. For many historians, his memoirs of this eventful period of U.S. history have become the single most important record of the war. Crusade in Europe tells the complete story of the war as Eisenhower planned and lived it. Through his eyes, the enormous scope and drama of the war-strategy, battles, moments of fateful decision-become fully illuminated in all their fateful glory. "Eisenhower gives the reader true insight into the most difficult part of a commander's life" (New York Times). (Inventory #: 123942)
$5,000.00 add to cart or Buy Direct from
Raptis Rare Books
Share this item