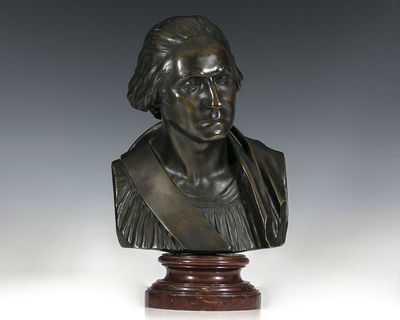 signed first edition
by Houdon, Jean-Antoine. [George Washington]
Fine bronze bust of George Washington, after the famed Houdon bust of 1785 which is considered the most accurate depiction of Washington. Bronze, mounted on a marble pedestal. French sculptor Jean-Antoine Houdon was revered for his life-like portrayals of numerous notable eighteenth-century philosophers, inventors, and political figures including Jean-Jacques Rousseau, Voltaire, Benjamin Franklin, Thomas Jefferson, Napoleon Bonaparte, and George Washington. In 1784, the Virginia General Assembly commissioned a statue of George Washington "to be of the finest marble and the best workmanship," necessitating a European craftsman. The Governor of Virginia gave the responsibility of selecting the artist to Thomas Jefferson, then ambassador to France, who together with Benjamin Franklin recommended that Jean-Antoine Houdon, the most famous sculptor of the day, execute the work. Unsatisfied to work from a drawing of Washington by Charles Willson Peale sent for the project, and lured by a potential commission for an equestrian monument by the Congress of the Confederation, Houdon agreed to travel to the United States to work directly from Washington. In early October 1785, Houdon and three assistants arrived at Washington's plantation Mount Vernon where they spent two weeks taking detailed measurements of Washington's arms, legs, hands and chest and made a plaster cast of his face. Before returning to France to perfect his work, Houdon presented his first draft of the bust, sculpted in terra cotta, to Washington, which he is known to have placed in his study. The final statue was carved from Carrara marble, depicting a standing life-sized Washington with a cane in his right hand and cape in his left. Chief Justice John Marshall, a contemporary of Washington's said of the work, "Nothing in bronze or stone could be a more perfect image than this statue of the living Washington." In fine condition. The bronze casting measures 14.25 inches in height. The entire piece measures 17.25 inches in height. American statesman and soldier George Washington served as the first President of the United States from 1789 to 1797 and was one of the Founding Fathers of the United States. He served as Commander-in-Chief of the Continental Army during the American Revolutionary War, and later presided over the 1787 convention that drafted the United States Constitution. He is popularly considered the driving force behind the nation's establishment and came to be known as the "father of the country," both during his lifetime and to this day. (Inventory #: 123102)
$48,000.00 add to cart or Buy Direct from
Raptis Rare Books
Share this item