THE TRUTH ABOUT BURNS 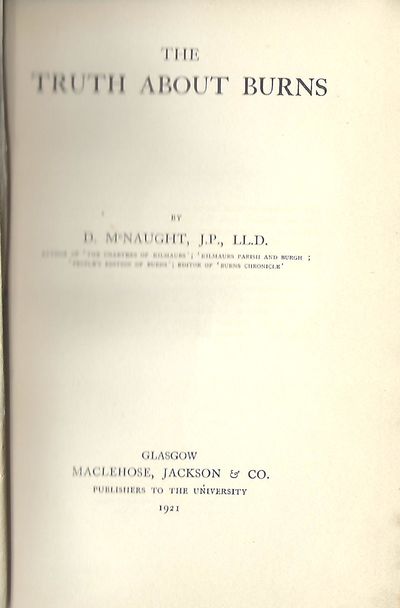 signed first edition 8vo., blue cloth, stamped in gilt on spine; 246 pages. The author's name is misspelled on the spine

by McNAUGHT, D.
Glasgow: Maclehose, Jackson & Co., 1921. First Edition. Signed presentation from McNaught on the front endpaper: "I am Dear Mr. Cunningham, Yours truly D. McNaught. Benrig, Kilmaurs. 25th Janry, 1922." Books signed by McNaught are uncommon and the Cunningham Clan has a long history in Kilmaurs. Duncan McNaught [1845-1925] was a parochial school teacher at Kilmaurs in East Ayrshire from 1867 and served at the school for over fifty years. In 1885, he co-founded the "Federation of Burns Clubs", now the Robert Burns World Federation. He was the president for thirteen years, from 1910 to 1923.and was the editor of the "Burns Chronicle" from 1893 to 1925. He had access to, or owned, many Burns letters and manuscript items that provided many new insights that he published as editor in the "Burns Chronicle." "The Truth About Burns" contains an unpublished letter to James Smith from Robert Burns and an extensive bibliography of the appearances of Burns's poems and notices in contemporary periodicals. McNaught had one of the finest and largest collections of Burns related items in existence at the time that included 600 volumes, including rare books, old magazines from 1780 to 1810, pamphlets and magazines relating to Burns, 20 portraits and engravings of the poet, a number of superb photographs of scenes in the Burns country; and 65 letters from descendants. 8vo., blue cloth, stamped in gilt on spine; 246 pages. The author's name is misspelled on the spine. Frontispiece Portrait.. Very Good (covers bright with minor bumping; contents clean & tight with some browning to front & rear endpapers). (Inventory #: 57417)
$125.00 add to cart or Buy Direct from Antic Hay Books
Share this item
Antic Hay Books
Offered by