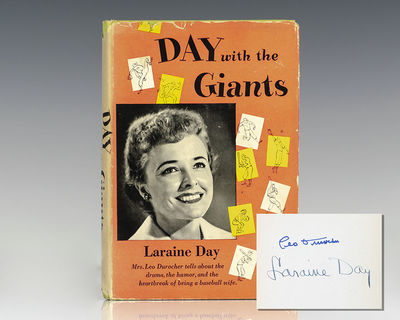 by Day, Laraine [Leo Durocher]
Garden City: Doubleday & Company, Inc., 1952. First edition of Day's account of her experiences as "The First Lady of Baseball". Octavo, original cloth, with drawings by Leo Hershfield. Signed by Lairaine Day and Leo Durocher on the third free endpaper. Very good in a good dust jacket. Jacket design by Sydney Butchkes. Jacket photograph by Editta Sherman. In addition to her numerous film and television roles, American actress Laraine Day acted on stage, conducted her own radio and television shows, and wrote two books. Her second marriage to New York Giants manager Leo Durocher and her involvement with his baseball career inspired the present novel which relays the drama, humor, and heartbreak of "being a baseball wife". (Inventory #: 123480)
$250.00 add to cart or Buy Direct from
Raptis Rare Books
Share this item