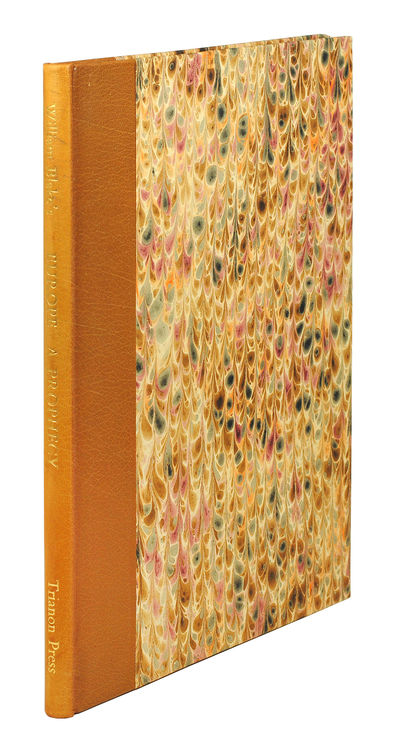 by Blake, William.
Folio. London: Trianon Press, 1969. Folio, 17 colour and one monochrome facsimile leaves and 9 pp of commentary by Sir Geoffrey Keynes. Very fine in quarter brown morocco over marbled boards in slipcase, as issued. § Limited to 526 copies, this is copy #313. The frontispiece (“The Ancient of Days”) is surely Blake’s most famous single image. "The second of Blake's "Continental Prophecies" [preceded by America and followed by The Song of Los], Europe presents in mythopoeic form the fundamental philosophical positions in conflict in Blake's revolutionary era. Historical events are reconfigured into their universalized representations through Blake's own cast of characters, including Enitharmon, the female personification of fallen nature and history, Orc, the spirit of revolt, and Los and Urizen, the "Eternals" who would become central to Blake's mythic system of the "Zoas." These contending forces lead beyond political revolution to an apocalypse of biblical scope." (The William Blake Archive). At the end is reproduced an extra etched leaf of text that Blake only included in two copies, which tell of a fairy that Blake caught who sang him a song about the five senses of man.Europe survives in only fourteen known copies, few complete, all but one held by institutions. The remarkable Blake Trust Trianon Press facsimiles, hand-colored using pochoir with extraordinary fidelity, are for most of us the nearest possible thing to handling the original book. Martin Butlin noted in the Blake Quarterly: “The long list of color facsimiles produced by the Trianon Press under Arnold Fawcus for the William Blake Trust were above all objects of beauty, recreating as near to perfection as possible Blake’s original achievements.” Bentley, Blake Books, 34. (Inventory #: 123970)
$750.00 add to cart or Buy Direct from
John Windle, Bookseller
Share this item