As the 1860 Election Looms, Abraham Lincoln Turns to the Telegraph to Manage his Urgent Campaign Communications, the First Presidential Candidate in American History to Use Electronic Communications to that End The only known document of Lincoln relating to the Telegraph Company during his 1860 election campaign to reach the market 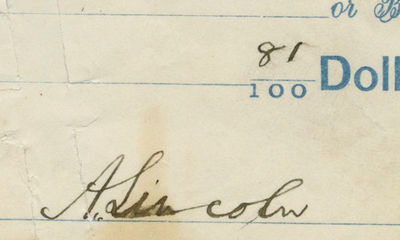 16/10/1860. Abraham Lincoln He early recognized the telegraph as an invaluable communications tool, and used that knowledge to have it help win his election, and the Civil War that followedAbraham Lincoln was always interested in technology. He displayed a lifelong fascination with mechanical things. William H. Herndon, his law partner, said ""he evinced a decided bent toward machinery or mechanical appliances.” On May 22, 1849, Lincoln received Patent No. 6469 for a device to lift boats over shoals, making him the only U.S. president to hold a patent.The telegraph came into wide use in the late 1840s, and was seen by most as a device to send news. Indeed, news via telegram began to appear in every newspaper worth its salt. But it was not fully understood as an instant electronic messaging technology that could be widely used for a multiplicity of purposes. It was not used a campaign tool in either the presidential elections of 1848, 1852, nor 1856. During this era, federal employees who had to send a telegram from the nation’s capital needed to wait in line with the rest of the public at the city’s central telegraph office. That was its perceived value.Lincoln, however, was drawn to the new invention. One of Lincoln’s chief military telegraphers of the Civil War, Charles Tinker, recalled that in the spring of 1857 he chanced to meet Lincoln in Illinois. Tinker recalled that Lincoln had watched him sending messages by tapping the telegraph key and writing down incoming messages he converted from Morse code. Lincoln asked him to explain how the apparatus worked. Tinker recalled going into considerable detail, describing even the batteries and electrical coils as Lincoln listened intently. Lincoln quickly grasped its great usefulness as a communication tool. He would become the first “wired” president, and would use the telegraph to help win the Civil War. He would spend more of his presidency in the War Department’s telegraph office than anywhere else outside of the White House, and sent out over 1,000 telegrams while he and Secretary of War Edwin M. Stanton received untold thousands more. David Homer Bates, one of the four original members of the U.S. Military Telegraph Corps, recounted that several times a day Lincoln sat down at a telegraph office desk near a window overlooking Pennsylvania Avenue and read through the fresh stack of incoming telegrams, which he called “lightning messages.” As telegraph keys chattered, he peered over the shoulders of the operators who scribbled down the incoming messages converted from Morse Code. He visited the office nearly every night before turning in and slept there on a cot during pivotal battles.But even before the war, the telegraph played a large role in Lincoln’s life starting in 1858, when he ran for Senate against Stephen A. Douglas. The Lincoln-Douglas Debates sent the messages to their newspapers back east via the telegraph. As a result, the new Republican Party had its first star for its anti-slavery platform. In 1859, Lincoln became a coveted speaker on the east coast because of the debates. His famous speech at Cooper Union in New York was telegraphed to the farthest reaches of the country. It was through the telegraph that the entire nation became aware of Lincoln and his views. From a backwoods rail splitter, Lincoln had become the spokesperson for those who wanted to limit or eliminate slavery.In 1860, Lincoln became the first presidential candidate to use the telegraph as an election tool. He was regularly in touch with his “friends” - to use a common term of the era - meaning those supporters who were actively promoting his candidacy across the entire North. He did not attend the Republican Convention in Chicago, as at the time that would have been unheard of and unseemly. Rather, he used the telegraph to keep abreast of the situation, and maintain in touch with his backers. It was through telegrams that Lincoln was informed of his nomination in May and his election that November. In the weeks that followed his election, Lincoln used the telegraph to begin to assemble his administration.Check signed, on his account with the Springfield Marine & Fire Insurance Company, October 16, 1860, payable to the Telegraph Company for $10.81. This would represent Lincoln’s payment for outgoing telegrams sent by him. At the time, Lincoln was concentrating on managing his campaign, and particularly on winning Indiana and Pennsylvania, as he telegraphed Herndon on October 10, “I cannot give you details, but it is entirely certain that Pennsylvania and Indiana have gone Republican very largely, Penn. 25,000 & Indiana 5 to 10. Ohio of course is safe."" There is a standard cancellation mark affecting one letter in the signature but only visible on close examination.A search of known checks of Lincoln to the Telegraph Company from this period reveals no others, nor does a search of public sale records going back forty years show any having reached the market. This is thus a great rarity, and likely the most direct link between Lincoln and the telegraph during his 1860 election campaign. (Inventory #: 21026)
$30,000.00 add to cart Available from Raab Collection
Share this item